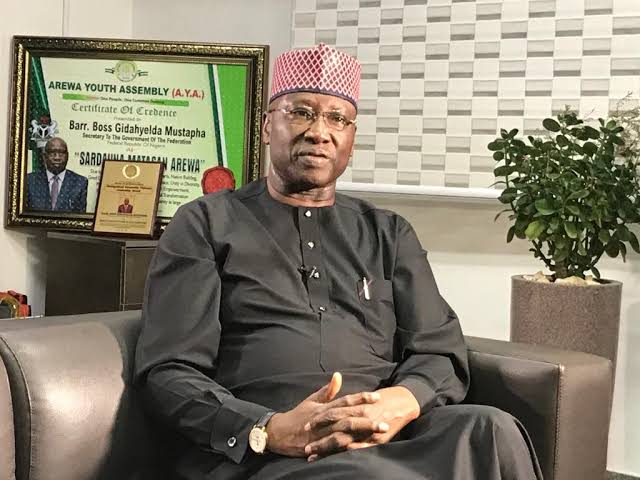 The Secretary to the Government of the Federation, Boss Mustapha, deserves the support and commendation of all for demanding that disciplinary measures in Ministries, Departments and Agencies should follow defined procedures and not the familiar autocratic approach by some of the ministers.

Chairman of Nigerian Collective, a non-governmental organisation in pursuit of good governance, Mr. Adeola Adewunmi, in a statement by the group’s Media Executive Officer, Otunba Femi Davies, said it was shocking that some Nigerians would rather encourage the culture of impunity as against the standard procedures as exemplified in saner societies.

According to him, reports about suspension of Managing Directors or Executive Secretary of agencies of government are becoming almost an every day affair, often times without logical explanation as to why such a person deserves the suspension.

“But a recent decision taken by the federal government through the office of the SGF is not only a breather from this ugly tradition but an indication that Nigerian can actually embrace the right path while addressing our collective challenge.

“It belies logic that some ministers just wake up some day and suspend certain heads of their agencies, even without hearing them out. And this was beginning to look like the new normal before this timely intervention, which is billed to go a long way.

“Take for instance the suspension of Damilola Ogunbiyi, the Rural Electrification Agency (REA) boss, she would have lost her international job had the presidency not reversed her suspension, even when there was no defensible justification for her suspension by the supervising minister. For how long shall we continue that way? Does it mean we are learning anything or progressing? No, we don’t think so.

“We are not saying erring heads of agencies should not be disciplined, when they err, our position, which aligns with that of the SGF and the federal government, is that the right procedure should be followed. Let it be properly established the individual in question erred through a properly identified due process and the offence affirmed.

“This is why we are disturbed by the deluge of attacks by certain funny characters, who should know better, calling out the SGF for saving the day and rescuing the country from further embarrassment arising from the typical abuses of Ministers and others. That choice cannot go on and that, the SGF has just done the needful to the matter.”