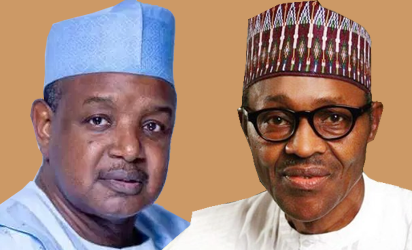 NAIJA NEWS NG reports that Progressive Governors like the Chairman of the forum, Kebbi Governor,Atiku Bagudu, Northern Governors Forum Chairman who is also the Plateau State Governor,Simon Lalong and the Jigawa State Governor, Abubakar Badaru were in attendance in the meeting that held at the President’s office in the Presidnetial Villa, Abuja.

After the meeting, Chairman of the Progressive Governors Forum, Atiku Bagudu, told newsmen that they came to make the president see their position on the APC crisis .

Bagudu said that the meeting was to “discuss party issues, the position of the Progressive Governors, as well as steps to support, unify and bring about a peaceful resolution in our party, the APC”.

“Mr President listened attentively and discussed with us and he gave us all the assurance we need to know that a resolution of contentious issues will soon be arrived at.”

The governors called Buhari a democratic for allowing the organs of the party decide if they want a National Executive Committee, NEC meeting to hold now.

“Mr President has shown that he is a democrat, he is not running the party. Yes, he is the party leader, he allows party organs to do and decide what should be done.

Bagudu added that the party is “never a perfect assembly. There will always be issues and that is why we talk, but yes certainly, organs of the party need to meet Mr President”.

RENO OMOKRI : Its Not Scriptural For The Church To Conduct Weddings