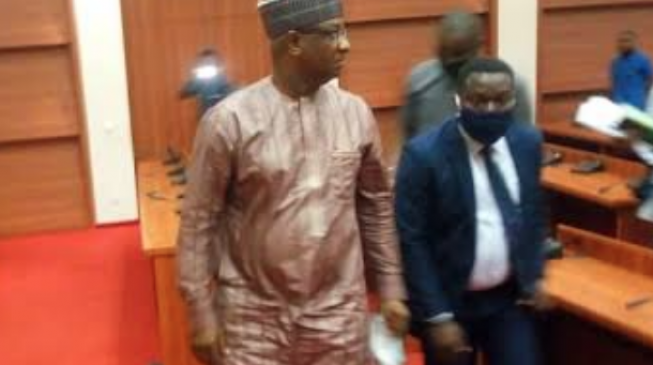 Festus Keyamo was in the news today for having an open disagreement with members of the National Assembly’s Joint Committee on Labour .

Keyamo, the Minister of State, Labour and Employment has released an official statement on what transpired . The reason for the meeting was for him to brief the Joint Committee on Labour from both Senate and House on the Special Public Works Programme.

NAIJA NEWS NG reports that the program will provide employment for citizens from the 774,000 local government areas in Nigeria.

After the rowdy session which ended without success, Festus Keyamo has explained what happened.

Keyamo revealed in the statement on Tuesday that what caused the problem was that he was asked why he didn’t first come to them privately for them to vet the programme before making certain moves.

He said they told him that they ought to have given their input on the implementation of the programme .

“In other words, they sought to control the programme as to who gets what, where and how. I insisted that I could not surrender the programme to their control since their powers under the Constitution does not extend to that. They insisted on a closed-door session.”

The Senior Advocate of Nigeria said he only wanted to respond to their demand in front of the press since they made theirs in the presence of the press.

Keyamo said he took a bow and left after he was given the permission to do so.

“Even their Rules that may provide for private hearings on public matters cannot override the provisions of the Constitution. I was then permitted to leave. I took a bow and left. I never walked out on the respected Committees as they may want to bend the narrative.

“After I left, I understand that the Joint Committees purportedly suspended the work of the Selection Committees nationwide until they decide how the programme should be run and who should be in those Committees. My opinion is that it is tantamount to challenging the powers of Mr. President.”

He said according to the powers given to the National Assembly under section 88 of the 1999 Constitution it does not have the constitutional right to give directive to the executive.

Keyamo explained that the committees or committee of the Senate and House of Reps can not pass binding Resolutions, they can only make recommendations to Plenary.

“All my life, I have fought for good governance and constitutional democracy. I will not come into government and be intimidated to abandon those principles. I will rather leave this assignment, if Mr. President so directs than compromise the jobs meant for ordinary Nigerians who have no Godfathers or who are not affiliated to any political party.”

He directed the set up committees all over the country which are made of CAN, NSCIA, NURTW, Market Women, CSOS, Youth Organisations, respected traditional rulers, etc to go ahead with their work unhindered.

“Only Mr. President can stop their work”, he declared