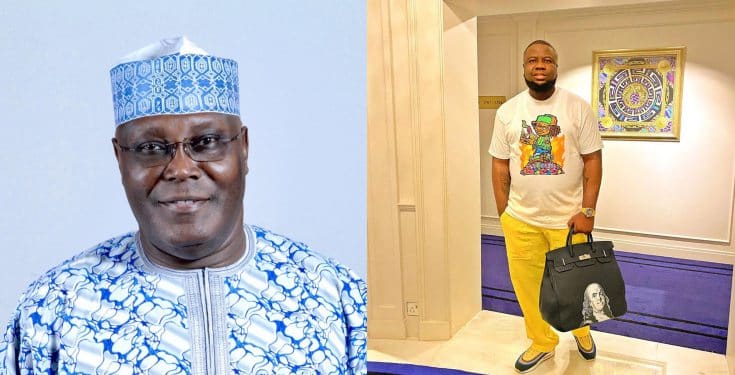 The Hushpuppi arrest is taking a political turn, Nigerians stormed the US Embassy in Abuja calling for the investigation of Atiku, Saraki and Dino Melaye .

The group wants all the PDP stalwarts who have been linked to cyber criminal, Hushpuppi investigated immediately. The protesters who are members of the Concerned Citizens Forum (CCF), held up placards which read, “Say No to fraud, Interpol act now”, “Interpol act and arrest Dino Melaye”, “Show me your friend and I will tell you who you are”, “FBI should investigate Atiku Abubakar.”

NAIJA NEWS NG learnt that they dropped a letter with US embassy and the Federal Bureau of Investigation to investigate Atiku, Dino and others who have been seen in public events in Dubai with Hushpuppi . You would recall the All Progressive Congress had earlier called for the investigation of these PDP leaders, the ruling party alleged that they might have been helping Hushpuppi launder money earned from cyber crimes.

“Also, since the arrest of those cybercrime suspects and the subsequent damage to the image and the economy of Nigeria as well as the crisis it created for Nigerians engaged in lawful businesses across the world, the ruling party had been muted.

“The only time the APC deemed it necessary to make a statement was when it thought it should play dirty, cheap, and irresponsible politics. At this point, we call on the APC to rein in the so-called Yekini Nabena and compel him to desist from making and circulating such malicious claims.”

Nigerians Link Abba Kyari’s Death To The Suspension Of Magu

OHANAEZE NDIGBO : Uzodinma And Nwodo Are Working Against Buhari