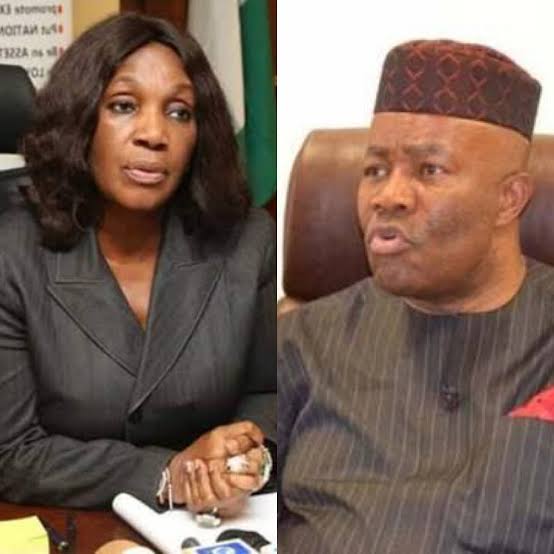 Godswill Akpabio has been again accused of bombing an oil pipeline as a serving Minister by Joy Nunieh the sacked Managing Director of the NDDC.

In an interview covered by Channels Tv, Joy Nuneih boldly said Godswill Akpabio the Minister of Niger Delta bombed a Nigerian oil pipeline. You also know that she has previously laid corruption allegation on the former Governor of Akpa Ibom State.

She accused Akpabio of forcing her to take an oath of secrecy, to award emergency contracts.

“For instance, he told me to raise a memo to fraudulently award emergency contracts for flood victims in the Niger Delta,” she said.

She narrated how she was told to take oath by the Minister .

“He told me to take an oath. Though he denied that, he told me three times. We had a reconciliation at the Villa in the office of Sarki Abba, the S.A. to the President on Domestics,” she said.

While we are struggling with economic recession, a serving Minister under Integrity Buhari bombed a pipeline

Buhari's President is the worst ever! pic.twitter.com/Bcoh3OXxU1

Akpabio in response to the corrupt allegations by Joy Nunieh,former NDDC MD, said the woman has temper problems which can be confirmed by her 4 former husbands.

That's how a Minister under Integrity Buhari chooses to respond to corruption allegations. pic.twitter.com/ov6D71nNvi

Trust Nigerians , they jumped into the ring with machetes to butcher Akpabio on Twitter .

One.acre says Free Dadiyata @NekkaSmith
“Akpabio’s best rebuttal or defense line is that fmr Acting MD of NDDC boss Joi Nunieh had 4 husbands and she has temper issues. See how they are handling issues of corruption in Nigeria like a Primary school Cultural dance troupe. You may be dancing and your wrapper falls..”
Ahmed Iliyasu
@IliyasuAA @TosinOlugbenga
“Akpabio said something that is common with Buhari. He said Buhari is not aware of the situation – my question is what is the job of Buhari as a president if he is not aware of everything? And for Akpabio, he is born to thief!!!”
Adenekan Mayowa @Mayorspeaks

“Goodluck Jonathan and PDP is the reason why Buhari has Corrupt officials in his cabinet, Yes I said it Buhari is a man of integrity, u can’t blame him for any corruption allegations in his Governement, PMB is a man with only 7 cows Magu, Malami, Akpabio are corrupt Bcos of GEJ”