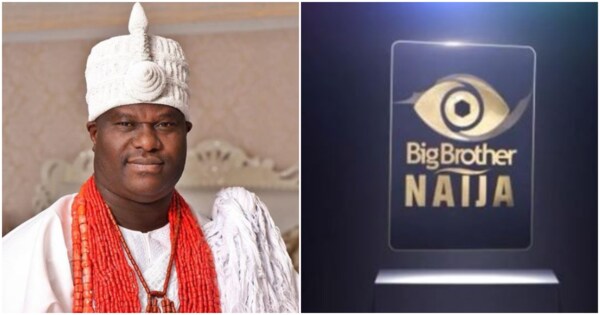 Ooni of Ife while receiving youths during the International Youth Day Celebration , called for the scrapping of BBNaija show.

“In the last general election, the total number of votes cast was around 27 million while over 170 million people voted during the 2019 BBNaija reality show” the monarch said.

This statement has angered Nigerian fans of BBnaija and below are their tweets as curated by NAIJA NEWS NG :

Bossville @Bossville1
“No disrespect to the royal throne but the his voice is not needed here… there are so many pressing issues in the nation & to me BBNaija is the least of them.

Dm me for cartoon artworks”

“#BBNaija does not need a replacement. The Ooni of Ife and any other person who are against Big Brother should come up with their own idea and run it. Big Brother does not have to end cos of that. There’s space for everybody. After its once a year for 3 months. BB i stan”

“How did we lost the art of civility ?
Can’t we disagree in civility ?
You can disagree with Ooni but you cannot insult him.

If you do, you are insulting the whole of Yoruba race.”

HIZZO
@Hizzo9
“Ooni: I am calling for the big brother show to be replaced.

OMOTAYO Of Lagos Flag of Nigeria
@Tee_Classiquem1
“Those of you supporting Ooni of life that big brother is making the youth irrelevant and not useful, my question is you that you’re not watching it how useful have you been , like what have you done to change anything? Hope I’m not being disrespectful?”

Baldilocks
@Baldilocks__
“Should Nigerian youths be more interested in Nigeria politics?
Yes they should.

However the Ooni needs to understand that there’s a reason for this lack of interest and it has very little to do with bbnaija.

Not sure why a lot of our elders don’t understand this.”

RalphSparkles
@iruefii
“Lol. I just don’t want to be insulting.
Can you as the Ooni advice the government to have online voting processes?
Or is it because you don’t watch TV during elections?

Ifeanyichukwu
@Afu_Dimkpa1
“The office of the Ooni is a highly place position and very highly respected. I don’t think an upholder of the office should speak from the position of ignorance.
No disrespect to the Ooni but these words of his shows he’s not informed about the BBNaija show.”

ԀЄMıҠҺѦʏSquared ng
@infonaija_247
“Ooni @BBNaija is not as distractive. Nigerian politicians or public office holders today never watched or had #BBNaija in their youth days. They are some of d most corrupt & tribalistic people in existence. The First BBN was in 2006 next was 2017. How’s it the cos of our problem?”

Related Topics:BBNaijaNigeriansOoniOoni of Ife
Up Next