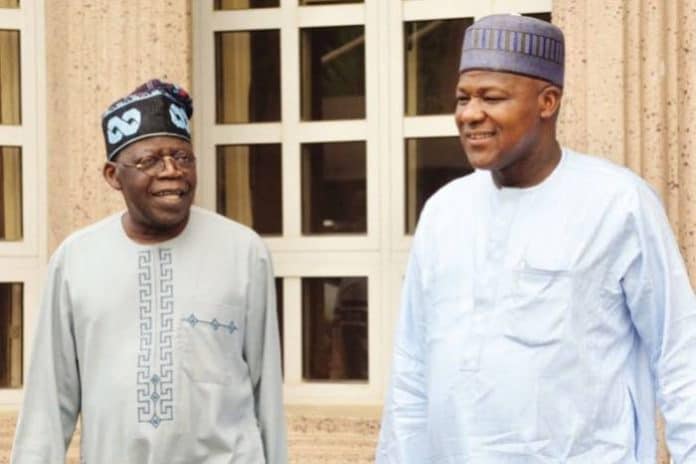 Yakubu Dogara has denied the news making the rounds that he is working on being the running mate for Bola Ahmed Tinubu in 2023.

NAIJA NEWS NG reports that the former Speaker who recently returned back to the All Progressive Congress (APC) from Peoples Democratic Party (PDP) has said it is now necessary to address the rumor that is gathering momentum daily.

Dogara alleged that Bauchi State Governor,Bala Mohammed ,is behind the rumor and the pictures that have gone viral on social media.

He  said: “Our initial decision was to ignore them since they are utterly baseless but it appears that the promoters of this fallacy are unrelenting in spreading the falsehood and have now succeeded in making it sound believable to the extent that even some conventional and ‘credible’ media platforms are beginning to take it up.

“In order to stop the further spread of this deliberate mischief whose objective is yet to be ascertained, the public is hereby advised to disregard and totally discountenance the purported story and pictures for what they are – the handiwork of mischief-makers.

“These stories and pictures we understand are being sponsored by officials of the Bauchi State government in their desperate bid to lend credence to the infantile delusions of their principal, captured in his ludicrous postulations that Rt. Hon. Dogara left the PDP just because he was “deceived” by the APC with the promise of a position come 2023.”

He added that, “Bauchi state Governor, Bala Mohammed had publicly alluded to this and has continued to push these narratives all in an effort to malign and disparage the person of Rt. Hon. Dogara and divert attention of the people from issues of poor governance in the state.”

“2023 is still years away and therefore, it is unnecessary, distracting and insensitive to start making unfounded declarations at this time when all hands ought to be on deck in tackling the challenges of our nationhood.”

“To our best knowledge, no political party sells nomination and expression of interest forms for the post of a running mate as he/she is only appointed or selected by a flag bearer. It is therefore preposterous for anyone to claim that someone is running for the position of VP when no flag-bearer has emerged.”

Related Topics:2023 electionAPCDogaraPDPTinubu
Up Next