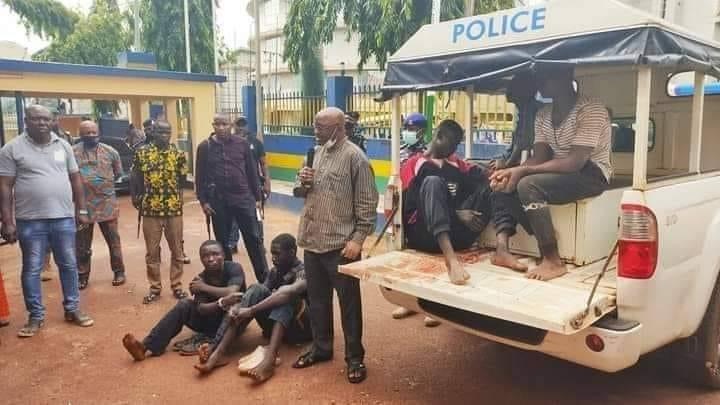 Brother of one of the arrested IPOB members in Enugu State has shared details of the event and his brother .
He shared his feelings under a post made by Prince Okey Emezu. Read Oke Emezu’s post below :
“Am heart broken seeing my younger brother in that vehicle”, writes Paul Nwaikuku SP. “No body knows he went to Enugu to do anything with IPOB”

A brother made this emotional remarks yesterday as a comments to one of my posts. Unfortunately, some of our heartless, mindless and mentally obscured friends thought it was a made up story because it wasn’t their own ox that was gored. He was attacked, abused, and intimidated for informing us his experience. Denial, thay said, not amount to nonexistence and comments like this is why many people will never want to come out to tell their own side of the story. And that is why I will be amplifying that voice by means of reposting the comment so that whoever that that reads will reflect… again I will leave every judgment to you.

Here is Mr Paul’s full story “Am heartbroken seeing my younger brother in that vehicle.

He don’t even know what ipob stands for.
No body knows he went to Enugu to do anything relating with IPOb training.

We were surprise when a strange number called us and he was the one speaking that SARS arrested him.

He is such an illiterate boy that can’t even spell his name.
He is not even informed of what ipob stands for. He don’t even understand English apart from eha-amufu dialect and thats why he is the only one that they didn’t grant interview because he won’t understand them and they won’t understand him.

He has hearing problems… You must shout before he can hear you.

How he got to Enugu is what we all don’t know.

Am not happy that ipob is threatening to retaliate while some people are still detained… What is their plans to get this little children’s out? Or do they Want to cause more troubles for this poor children?