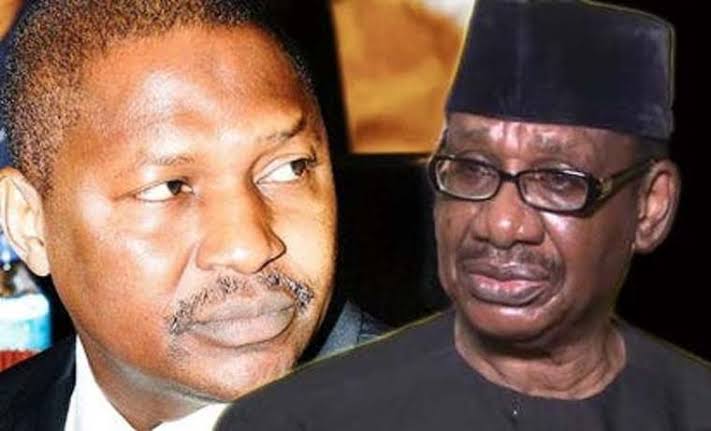 Itse Sagay a Senior Advocate of Nigeria has raised alarm over Malami ‘s plan to shutdown the Economic and Financial Crime Commission, EFCC.

NAIJA NEWS NG learnt that the Artoney General of the Federation Abubakar Malami has presented a bill to the Federal Executive Council for the Establishment of another anti-graft agency to be called “Crime Recovery and management Agency.

Malami while speaking to newsmen said the FEC has approved the transmission of the bill to the National Assembly.

”The Federal Ministry of Justice presented to Council a memo today (Wednesday).

The memo is about a Bill which seeks the approval of the Council to transmit to the National Assembly for passage.

It is the Proceeds of Crime Recovery and management Agency Bill.

What happens before now is the proceeds of crime are scattered all over, and mostly in the hands of different and multiple agencies of government inclusive of the police, the DSS (Department of State Service), EFCC (Economic and Financial Crimes Commission), and ICPC (Independent Corrupt Practices and other Related Offences Commission).

So, with that kind of arrangement which is ad-hoc, there is no agency of government that is saddled with the responsibility of data generation, an agency that can give you off-hand the number of landed assets, number of immovable assets, the amount in cash that are recovered by the federal government by way of interim forfeiture overweigh of a final forfeiture.

So, it is indeed over time a kind of arrangement that is not uniform and consistent.

If you have a budget item for recovered assets, this agency will now be in a position to provide information to the federal ministry of finance, budget and National Planning on-demand as to what amount is there available for budget purposes, thereby establishing the desired transparency, the desired accountability which has not been available before now,” Malami said

Itse Sagay is not seeing the bill from Malami’s view point, the Senior Advocate said this is the Minister’s proclivity for aborting criminal cases in favour of major political and governmental figures.

Sagay alleged the bill is sponsored by those that were “too ashamed to put their names to the draft bill being circulated”, describing such people as the real “enemies of Nigeria”.

“With all the above-established facts, the gravity of the proposed change becomes overwhelming,” the statement added.

“When in addition to all this, we recall the well-known proclivity of the Attorney-General for entering nolle procequi in favour of major political and governmental figures, this move to effectively scrap the EFCC becomes more alarming.

“We, therefore, call on the National Assembly and all Nigerians to vigorously reject this attempt to perpetrate a fraud on the nation by effectively scuttling the EFCC and shutting down Nigeria’s anti-corruption war.”

Sagay pointed out that the offensive highlights of the proposed bill, include, “Repeal of the current EFCC Establishment Act which has been a spectacular success and has brought Nigeria into limelight as a major force against corruption.

“The replacement of the Executive Chairman of the EFCC with a Director-General who is effectively to be appointed by the Attorney-General.”

He said that this will eliminate the freedom currently enjoyed by the EFCC and replace it under the complete control of the Attorney-General.

See Why Islamic Movement Of Nigeria Is Threatening Pete Edochie