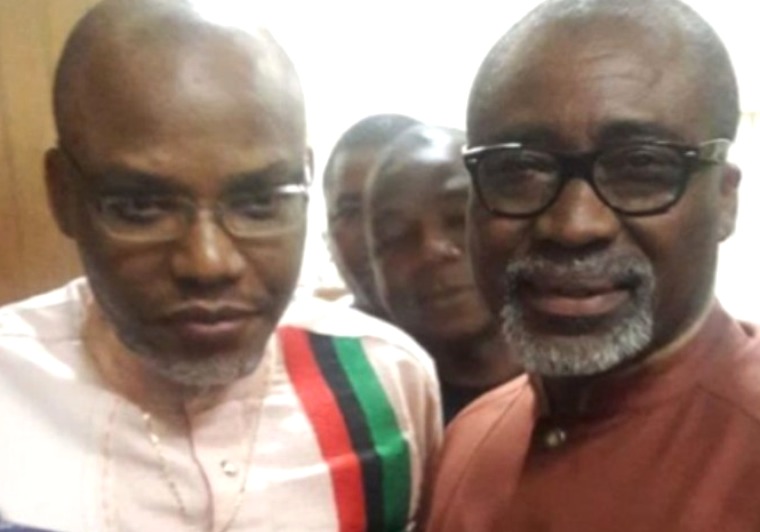 Nigerians are calling for the arrest of Senator Enyinaya Abaribe after Justice Okon Abang ordered Senator Ali Ndume to be remanded in Kuje prisons.

NAIJA NEWS NG reports that Ali Ndume was remanded for for failure to produce Abdulrasheed Maina in court as his surety.

Enyinaya Abaribe also stood as surety for Indigenous People of Biafra’s founder, Nnamdi Kanu , who also jumped bail . You would recall that Nnamdi Kanu disappeared after soldiers stormed his house in Afara Ibeku and reappeared in Israel.

Nigerians reacting to this news have called for the arrest of Abaribe. Read their words below:

“EYINNAYA ABARIBE(Chelsea hotel wuse2) please hope you’re making arrangements for your next residence in kuje? You know ndume is a Fulani man and a member of the APC, these facts didn’t save him sha… Get ready maka it is almost time.

“I respect what Sen.Abaribe is doing as Minority Leader but can
@MalamiSan
&
@MBuhari
tell us what makes him untouchable that doesn’t also apply to Ndume?.Both are sureties for people that jumped bail..Is Ndume’s criticism of the release of boko haram prisoners ruffling feathers?.”

“Yes, what we need to seek is for the same treatment to be meted on Abaribe. The position of the law should stand. Whether the enforcement of law has political undertone is left for politicians to decipher, but we want a judiciary that would work without interference”

“Ali Ndume:the Government is right where rule of law is followed. It is also a witch-hunt where other people of equal cases (such as abaribe) are freed.”

“Which of the Ali Ndume are we talking about the one that was found complicit in the bombing of UN house in Abuja. Comparing him to Abaribe is a disservice. Abaribe is really a distinguished senator . However the judge’s usually know their even though the Govt may not be absolved”

Those Of You Calling For The Arrest Of Sen Abaribe For Standing Surety For Mazi Nnamdi Kanu And Saying That MNK Jumped Bail, Are Insane And Ignorant. The Army Went To The House Of MNK Just Few Weeks He Was Supposed To Appear In Court To Kill Him Yet To You That Is Okay? NDI ARA! pic.twitter.com/VdPVtz6CzT

Ada King
@Real_AdaKing
Replying to
@MrSomtoOkonkwo
“Those calling for Sen Abaribe arrest are not apprised of the situation. The Nigerian Military invaded the home of Mazi Nnamdi Kanu. That invasion alone has exonerated him on surety agreement. That’s why FG couldn’t win the case in court.
Ndume and Maina case is so different”