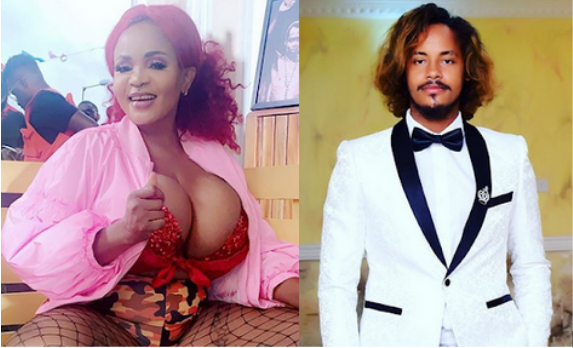 Actress Cossy Ojiakor has opened up on the allegations poured on her by her estranged fiance, Abel Jurgen.

NAIJA NEWS NG reports that the actress said she has played the role of a mother to him for the past 9 months they have been together.

Cossy Ojiakor shared a video of Abel frog jumping and begging her for forgiveness.  She also threatened to release more videos on Instagram.

For 9 month I played the role of a mum to you but not anymore….. your so toxic and violent … So I am moving on next week… there are things frog jumps can’t fix anymore… I have decided to take back the name German machine because I gave that to you. U know ur dad is Netherlands’s …..a video of one of his violent attack on me where I captured him in the background is on @cossysxcapades German machine is a black sex toy I bought in Germany. ……My future man…. pls make sure u have a house ( rented or not because I won’t harbor you in mine) Make sure you have a car (because I won’t let u drive mine) make sure you have Life( I don’t need a body guard to police me around my male friends) make sure u have a prick. Not the bender type that makes errection. painful when am riding you. And also not the urgent 2k type because I want to go on vacations …. trips…feel free to say hi from Monday next wk. I will be humble and chat nicely… German machine is a red and black badass bulldog with a wearable prick. Wish I can. Post it’s picture. I bought it in Germany in 2015… my German machine never left … it is right here with me. …Am saving it my my next…Let the dating game begin