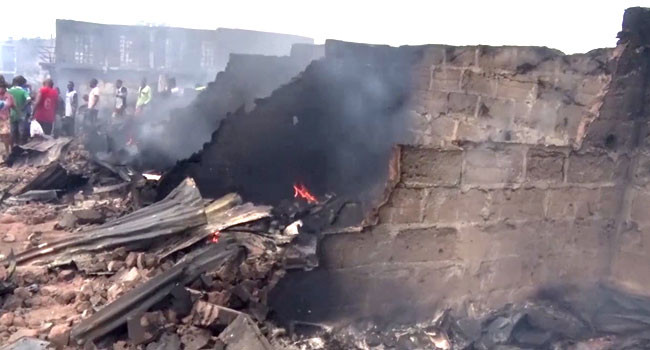 400 Shops Burnt To Ashes In Anambra

Anambra State’s markets have consistently burnt by fire in recent time without any serious preventive measures from the government of the state . Old Motor Spare Parts market popularly known as Mgbuka is the latest on the list of burnt markets in Anambra State.

Though the cause of the fire is yet to be ascertained, the Chairman of the Market Mr Samuel Ezeobodo said market security officials blamed the fire incident on a leaking gas in one of the shops.

Ezeobodo also confirmed the death of one of the market leaders, Mr Godwin Edozieuno. He said Edozieuno died of shock upon hearing that his shop was among those affected by the fire.

Channels Television reported that the mammoth crowd which gathered questioned the competence of the security guards, who according to them should have taken proactive measures to cut down the extent of damage in the market.

Here are more photos below;

The Eagle On Your Logo Is Corrupt, Stolen From The Internet- Man Tells EFCC

Alumnus Homecoming: When UI Cheered for the ‘Man of Peace’