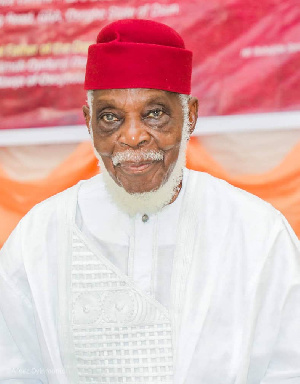 NAIJA NEWS NG reports that his son, Folabi confirmed his death on Thursday 30 July. He revealed that the late Yoruba leader died at the ripe age of 94.

He was a Second Republic Senator was until his death an All Progressive Congress leader.

“He was until his death was a leader of the Yoruba socio-cultural group, Afenifere (Ilosiwaju Yoruba) and a chieftain of the All Progressives Congress (APC)”, it noted

The statement confirmed that Fasanmi passed on peacefully in Osogbo.

Burial arrangement will be announced by the family in conjunction with his political associates and South West Governors.

When Pa Ayo Fasanmi clocked 94 less than a year ago in September 2019, President Buhari celebrated him with these words :

“As a legislator, who served in the House of Representatives and Senate, the President believes Pa Fasanmi’s focus on people has shaped his life philosophy and politics, government can only remain relevant when it caters for the needs of the vulnerable and voiceless.”

He was born in Ekiti in 1925 so he is approximately 95 years old. Ayo Fasanmi was a professional Pharmacist and Politician.

Miyetti Allah Reveals Those Behind The Killings In Southern Kaduna