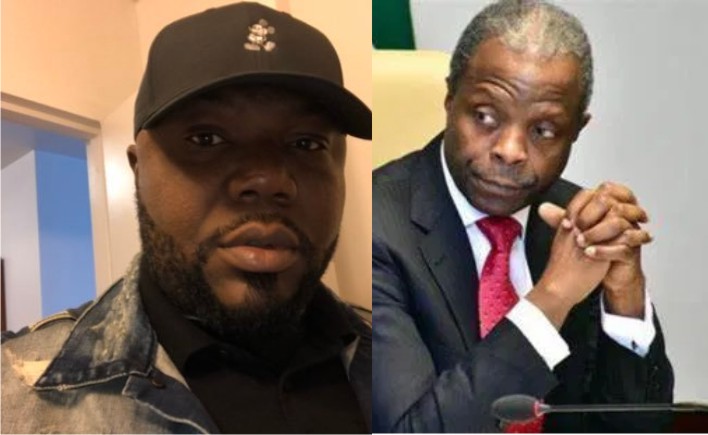 Yemi Osinbajo , Nigeria’s Vice President directed the Inspector General of Police to investigate the allegation by Jackson Ude who alleged Magu gave the him N4 billion.

Osinbajo in a letter by his Lawyer, Taiwo Osipitan , dated July 8, 2020 asked the IGP , Mohammed Adamu to activate a criminal proceeding against the Blogger.

NAIJA NEWS NG reports that the USA based Jackson Ude in response said he is not afraid of the Vice President and asked that the verbatim transcript of Magu’s confession be published to prove him wrong.

“Since Osinbajo, the Star Boy, is denying, let’s have lawyers compel the Presidential Panel investigating Magu and the Police, to release the verbatim transcripts of Magu’s confessions. This is not about waving immunity.

“I am not afraid of Osinbajo and his minions. If he indeed wants to go to court, he needs to resign first, and sue me. He cannot be VP and be using state resources to intimidate the Judiciary. He cannot wave an immunity that he didn’t place. Osinabjo should resign first!

“Osinbajo should have used the U.S Police, FBI or even the CIA to charge me for criminal defamation. Using the Nigerian Police is a waste of poor Nigerian taxpayers money. Except his aim is to arrest me in Nigeria, lock me up forever. Anyway, perhaps Na my ghost dem go arrest.”