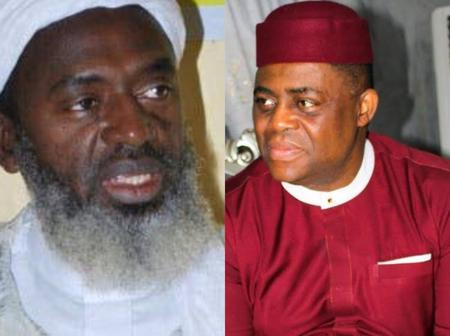 Femi Fani-Kayode has blasted Sheikh Gumi who recently asked for amnesty for bandits as coup plotters were pardoned.

Sheikh Gumi said : “I see no reason why we can not accept their (bandits) repentance and give them amnesty. You ask why do we give them amnesty but they told us specifically that they are ready to drop their arms and they don’t want to be pursued with legal actions after they repented.

“If the country could pardon coup plotters who committed treasonable offences in the era of military administration, the bandits can as well enjoy similar forgiveness even better under democratic rule.

“These people in the bush who have taken arms, they are criminals. I wonder who is not a criminal. Since Nigeria forgave coup plotters, forgave those that killed. Even those that instigated civil war; civil war that millions of people died, I see no reason why we can not accept their repentance.

“Since that is the bottle-neck and it is only the federal government that can give them that leverage. And strangely we found out that they are victims too. They were victims of profiling. So many of them were arrested and punished just for looking like herdsmen.”

“If coup plotters are pardoned, why not bandits?”- Sheik Ahmad Gumi. Maybe we should give Hitler, Pol Pot, Stalin, King Leopard 11 of Belgium, Osama Bin Ladin, Al Bagdadi, Abubakar Shekau & every other mass murderer& genocidal maniac in world history a posthumous pardon too!

First he urges the terrorists to target Christian soldiers, then he said that the kidnapping of children from their schools by the same terrorists was a lesser evil& now he says this. Has Sheik Ahmad Gumi finally lost his mind. Is he in desperate need of medical attention?

Has he become the official spokesman for the terrorists that are slaughtering, tormenting, raping, mutilating & kidnapping our people all over the country? I am convinced that Gumi is no longer himself. Something has gone wrong with him. He is shrouded in darkness & deceit.

Someone please tell him that we have had enough of these asinine, puerile, infantile, insensitive, uncharitable, wicked, dangerous & self-serving contributions & remarks.The country is already on the brink of war & fratricidal butchery: Gumi should not push us into it with his reckless provocations & deeply insensitive, callous, heartbreaking and insulting commentary.

The terrorists he is defending are a living manifestation of pure and unadulterated evil and every single one of them deserves to be eliminated or brought to justice in a court of law for their crimes against humanity. Gumi, stop pampering bloodthirsty& bloodlusting psychopaths & murderers. Anyone that targets innocent& defenceless women & children & kills them is the scum of the earth& deserves to be sent to hell in a glorious hail of bullets.” 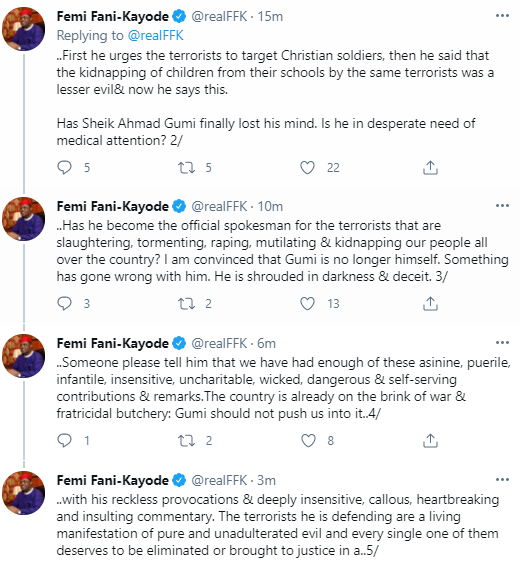