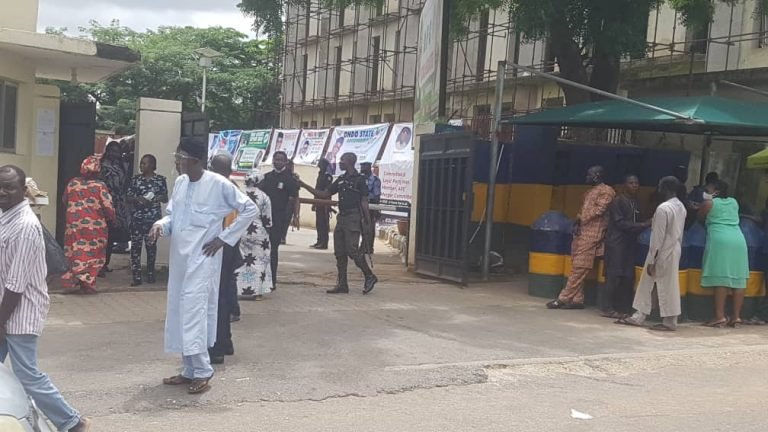 APC crisis worsens. Police officers on Tuesday afternoon sealed the national secretariat of the ruling party in Abuja on the orders from above.

Naija News NG reports that the officers who executed the job said they were working on directives from above. The officers ordered out all the workers and journalists who were already inside the building then later asked a few in with strict instructions to not conduct any interviews inside the secretariat.

“The instruction we received was not to allow anybody in, but we are working together that is why we are here,” a police officer told reporters.

“There should not be interview here for now. Source your story quietly and leave.”

This is coming after All Progressive Congress’ National Working Committee (NWC) members disagreed on way to resolve the APC crisis .

You would recall that APC crisis started when an Appeal Court upheld the suspension of Adams Oshiomhole as National Chairman.

Also the some members of the APC Progressive Governors Forum met with President Buhari to state their position on the crisis rocking the ruling party.

“Mr President listened attentively and discussed with us and he gave us all the assurance we need to know that a resolution of contentious issues will soon be arrived at” Atiku Bagudu said.

What Primate Ayodele Said About Ajimobi And Tayo Amusan’s Lives

OBASEKI : Why His Edo Governorship Ambition Might Be Over