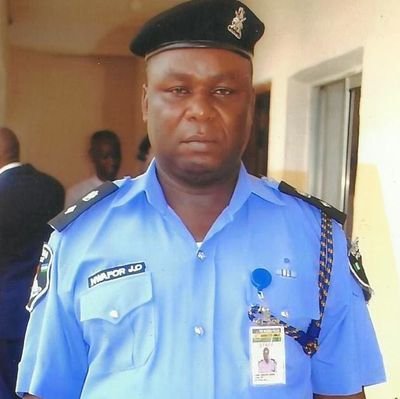 NAIJA NEWS NG reported the alleged evil works of CSP James Nwafor in Awkuzu. Nigerians are calling for his immediate arrest and prosecution.

I join youths in Anambra state to call for immediate probe of CSP JamesNwafor ‘s days as OC SARS Awkuzu, who is now SA to Gov. Obianuju.
He should be made to answer for all the atrocities he allegedly committed not rewarded with an appointment.#EndSARS pic.twitter.com/P8OfPLZCDc

“CSP JamesNwafor the former OC SARS Awkuzu allegedly killed Chijioke; check Right pointing backhand index #WhereIsChijioke , and made his father swim a river filled with dead bodies in search of his son’s body.
We demand justice for Chijioke and other victims of this man. #EndSWAT”

“I join youths in Anambra state to call for immediate probe of CSPJamesNwafor ‘s days as OC SARS Awkuzu, who is now SA to Gov. Obianuju.
He should be made to answer for all the atrocities he allegedly committed not rewarded with an appointment.
#EndSARS”

“CSP JamesNwafor must not escape sha, he has to be arrested and made to answer for his numerous crimes. Someone like that needs to be tried at the Hague sef”

“This is the picture of the devil. This is CSP JamesNwafor, he caused the death of several folks in Anambra. Can we get like 10RT so that the world can know the devil is now in Nigeria. He must be brought to Justice. #EndSWAT #EndSARS”

“The likes of CSP James Nwafor exist in every State government in this country. The so called hard men, monsters that are used to fight political enemies. E dey everywhere. E dey Akwa Ibom State, and my people know. Obiano is just doing norms”

“Awkuzu SARS was an Abattoir and CSP JamesNwafor was the chief butcher. He’s a beast from Ebonyi state and in charge of the killings in Awkuzu SARSvin Anambra state. This man has no mercy & needs to be punished for all his crimes.

Retweet this till Justice is served.

“This man former OC SARS Awkuzu; CSP JamesNwafor, have extrajudicial killed more than 5000 youths in Anambra state in the past 15 years ago.

Anonymous we will love to see him exposed as the government is shielding him.”

SARS TO SWAT : Femi Falana Speaks On The Real Issue