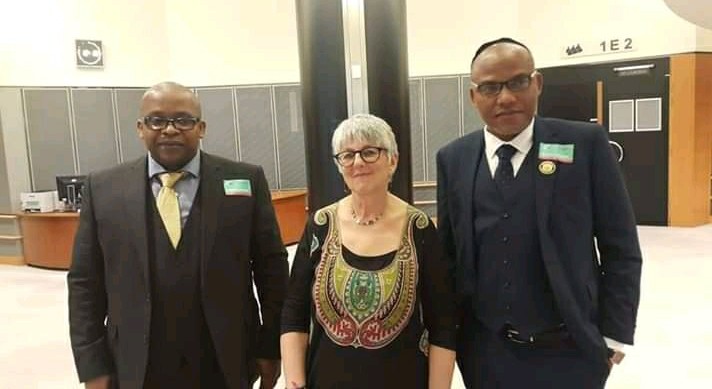 Biafra restoration group, IPOB , seems to be nearing the point of implosion as Uche Mefor calls out bigots and terrorists within the group.

“They are going about beating up elderly people in our villages in Igbo land” Uche Mefor revealed in a Facebook video he made in response to IPOB members who accused him of worshiping idols as a Roman Catholic .

According to Uche Mefor, IPOB’s Deputy Leader, there are some bad elements in IPOB who are going about unleashing untold hardship on our Igbo people.There are group of IPOB members who use their positions to terrorize others. Naija News NG reports .

Uche Mefor wrote : “For some misguided, overzealous religious bigots who think that they can hijack IPOB, the posts I made and my broadcast are primarily and squarely directed to you and has nothing to do with our leader, Mazi Nnamdi Kanu’s broadcast yesterday. If I have issues with that broadcast, however, I will definitely say it if need be. The bullies here are also directly addressed. Get your acts together, because you cannot prevail, I assure you. There is no room for victimization, religious politics and bigotry here.”

Responding to those who think speaking out his opinions and concerns on IPOB on Social Media is wrong , Uche Mefor wrote :

“It is height of naivety for some people to think that I don’t have the right to air my opinion and cannot post same on my Facebook profile.The immediate cause of my post(s) yesterday was an inbox message(s) from some religious bigots that I am worshiping idle. That has been the mindset of some horrible human beings masquerading as Biafra activists. So, for their information, it is imperative that I make that pronouncement. However, I have also noticed that from the reactions of some uninformed overzealous individuals, it appears that nobody has freedom of worship in Biafra except the standard they set for you and so, I am with reference to that boldly reaffirming that I am Biafra Christian (Catholic) and shall remain so till the end.You get what you are looking for. Threatening me is a serious mistake for anybody or group doing so because you will get contrary expected outcome.I am not the one that can be intimidated(doing so will be to your chagrin) and certainly, nobody is a Biafran more than I am.I was the first person to challenge the Christian leaders and especially the Catholic Bishops of Nigeria over their criminal silence on the beheading of their members and to speak up and protest so let nobody tell me nonsense. If you are uncomfortable with my views or opinion on this, that means that you will continue to have heartache.The mistake you will make is to underestimate my resolve in this, simply don’t give me the impression that you are dictating for me on what is clearly my right to choose.
Uche Okafor-Mefor
18/06/2020”