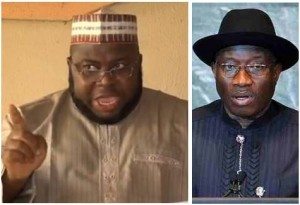 NAIJA NEWS NG reports that Asari Dokubo used all kinds of unprintable words on the former president of Nigeria in a Facebook address he made on Sunday 18 October.

He told Goodluck Jonathan that those telling him that Buhari will hand over to him in 2023 are deceiving him , he said Buhari will use him and disgrace him.

He said: “Goodluck Jonathan is now fooling himself running around to Aso Rock thinking that they are going to give him the presidency come 2023.

”They are not going to give you [Jonathan] anything. They will disgrace you and take away that small respect that you have and throw you in the trash can. But we are watching, let them prove us wrong and let us see.”

You would recall that Jonathan’s last visit to the presidential villa was on the 15th of October 2020 . He went to brief President Buhari on the developments in Mali.

Former President Goodluck Jonathan is the Special Envoy/Mediator to the West African country.