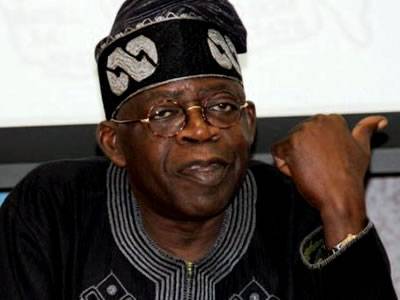 Tinubu has met with the Governors of All Progressive Congress in Lagos on Edo 2020 election .

Naija News NG brings you @Gen_Buhar , a staunch Buharist tweets on the contents of the meeting, read below ”

‘The Governors begged Tinubu to urge APC to give Obaseki RIGHT OF FIRST REFUSAL. But Tinubu was said to have responded that ordinarily, he would not have been opposed to that.However, he reportedly pointed out to them that once other party members indicate interest, the democratic thing to do in the circumstances would be to allow the primaries to hold. He reportedly told them it would be difficult to hold down the ambition of other party faithful, advising them to come to terms with the possibility of intra-party contests in the two states.

There were discussions around the mode of primaries with the governors favouring the indirect process.But the national leader was said to have told them to recognise the constitutional right of the National Working Committee (NWC) to organise the primaries, stating firmly that he personally had always preferred the direct mode of selecting the party’s candidates.

Citing the presidential primaries that produced President Muhammadu Buhari as well as Oyetola in Osun and Sanwo-Olu in Lagos,  the Jagaban reportedly said the direct primaries give the candidates and the party the opportunity to test their electoral machinery and popularity, saying once a candidate emerges through that process, the general election becomes much easier. He, however, assured them that whichever one the national secretariat of the party approves, he would prevail on the the leadership to ensure that the process is free and fair to all the aspirants.’