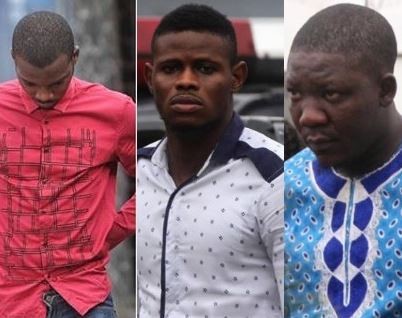 EFCC’s Lagos Zonal office, on Thursday, August 2, 2018, arraigned  the trio of Adewale Dairo, a.k.a. Bobby Okantay, Badmus Kayode Kafil and Baruwa Oluwaseun before Justice Chuka Obiozor of the Federal High Court sitting in Ikoyi, Lagos on an eight-count charge bordering on conspiracy and obtaining under false pretence to the tune of N1,570,005.25.

The defendants who were charged alongside Kunle Chinyere, Daniella Madu, Kola Ade and Theophilus Nweke Nnamdi (all at large), allegedly conspired to obtain the money from one Haim Ben Harush, an Israeli bicycle seller, under the pretence that they had a manufacturing plant in the United Kingdom.

One of the counts reads: “that you, Adewale Dairo, a.k.a Bobby Okantay ‘M,  Badmus Kayode Kafil ‘M’, Baruwa Oluwaseun ‘M’, sometime in 2017 at Lagos within the jurisdiction of this Honourable Court with intent to defraud, did fraudulently and dishonestly conspire amongst yourselves to obtain the sum of  N1,570,005.25 ( One Million, Five Hundred and Seventy Thousand, Five Naira , Twenty -five Kobo) from one Haim Ben Harush ( an Israeli  bicycle seller) under false pretences that you have a bicycle manufacturing plant in the United Kingdom, which pretence you knew to be false and thereby committed an offence  contrary to Section 8(a) of the Advance Fee Fraud and Other Frauds Related  Offences Act 2006 and punishable under Section 1(3) of the same Act.”

The defendants pleaded not guilty to the charge preferred against them.

In view of their pleas, the prosecution counsel, Nwadu Ukoha, asked the court for a trial date and prayed that the defendants be remanded in prison custody. Counsels to the defendants urged the court to grant their clients bail in the most liberal terms.

Justice Obiozor granted the defendants bail in the sum of N10m (Ten Million Naira) each with one surety in like sum. The sureties each must be resident in and own a property in Lagos.

They must show evidence of three years’ tax payment and swear to an affidavit of means.

‘Any young man who lasts more than 10 minutes during sex and engages in sex more than twice a week, will never go far in life.’