Catriona Laing, British high commissioner to Nigeria has condemned the murder of Deborah Samuel , a female University student in Sokoto by religious extremists.

The mob that killed her accused her of blasphemy. Catriona Laing has condemned the killing of Deborah Samuel and asked the relevant authorities to ensure justice served.

Laing who reacted to the killing via a tweet shared her view on Friday May 13.

“I condemn the murder of Deborah Samuel in Sokoto, and urge the police and relevant authorities to ensure the perpetrators of this horrific act are made to face justice in line with the law.” 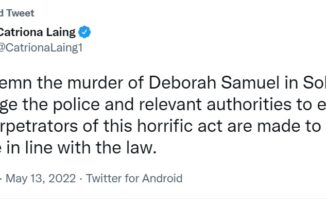