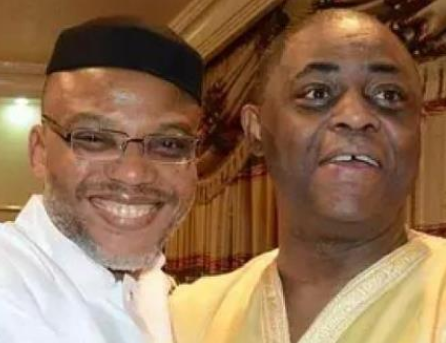 Femi Fani-Kayode has said that Bola Tinubu and an Igbo man will not be given presidential ticket in 2023 . He also spoke about Nnamdi Kanu ‘s struggle.

Naija News NG reports that the former Minister of Culture, and Aviation during the administration of ex President Olusegun Obasanjo, Mr. Femi Fani Kayode has said that former Lagos State Governor, Ashiwaju Bola Ahmed Tinubu will not get the All Progressive Congress Presidential ticket in 2023.

Mr. Fani Kayode made this statement towards the end of his zoom interview yesterday where he gave reasons Igbo Presidency in 2023 will be difficult considering the people at the helm of affairs in Nigeria today.

The Cambridge alumnus who shared the video of his interview on his Facebook and Twitter accounts said that former Lagos State Governor and national leader of the APC Bola Ahmed Tinubu won’t get APC Presidential ticket in 2023.

According to Mr. Kayode, the people that matter in this present government want power to remain in the zone it is now come 2023 and would do everything to achieve that.

Mr. Kayode went ahead to say that even if Tinubu manages to get it, the North will dump him for another candidate from the North who will fly the flag of the opposition party.

Mr. Kayode who asked people to watch as his predictions in politics is 8/10 correct. On the political situation of Igbos in Nigeria, Mr. Kayode said that Nigeria including him owes Igbos apology and must do that.

He mentioned the ill-treatment given to Igbos in Nigeria before, during and after the war. According to him, Igbos were forced to exchange any amount they had in banks after the war for just 20 pounds.

He recalled how their properties were looted during the civil war all in the name of abandoned properties. He also mentioned how Igbos were left behind in Nigeria until Olusegun Obasanjo came and gave prominent Igbos like Oby Ezekwesili, Dora Akunyili and Professor Chukwuma Soludo strategic appointments.

He stated that Goodluck Jonathan also continued in that line. He regretted that everything changed in 2015 when Igbos were called 5%.

He recalled his discussions with Nnamdi Kanu when both were prison saying that he felt Kanu’s pain on the plight of his people after listening to him.

Mr. Kayode said that Igbo Presidency in 2023 will heal Igbos and the wound of the civil war, stating that referendum should be part of Nigeria’s constitution to allow people decide their future.

OBASEKI : How I Made Oshiomhole Governor And APC Chairman