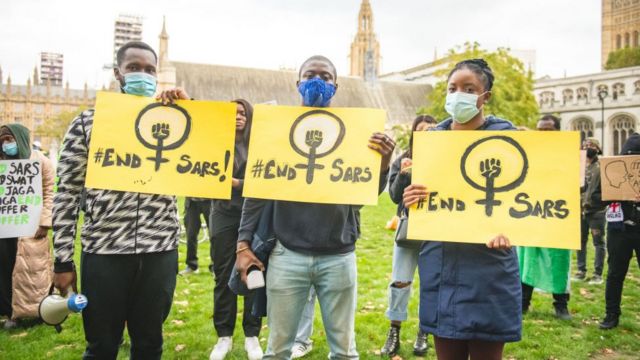 EndSARS backbone and organizers, Feminist Coalition , led by Feyikemi Abudu and Modupe Odele has been called out by Nigerians .

News Mail Nigeria gathered that the Feminist Coalition was accused of withdrawing $51,000 from the #EndSARS donation Bitcoin wallet.

The allegation raised dusts online and Nigerians have been expressing anger and disappointment . Read tweets below:

“This isn’t an attack on Feminist Co ,its basic common sense ,the beauty of #bitcoin and decentralization don’t care about spreadsheet Accountability,it’s PUBLIC,you can’t empty the donation wallet to a new wallet that has 0 (ZERO) past transactions and expect people not to talk”

The sister of Chijioke who was allegedly killed by James Nwafor also shared tweets on how Feminist Coalition members reached out to her to give her family N500,000 . Read her tweets below :

@Ada_mummyya
After the massacre on October 20/2020,
@feminist_co
reached out to me and offered to give my family 500k and we accepted it. It was sent in November 2020. They also sent some videographers to come talk to my parents and take videos about our story. I am grateful for that.

All through this week, people have been throwing subs at them for embezzlement and I’ve consistently been asking for proof or evidence so today, an evidence was posted and which I immediately asked that the
@feminist_co
members react to. I noted that it was a huge amount and so..

Needed their immediate explanation as it has the capability of tainting their good works.
Some people explained immediately by showing me the report from 22nd Oct. 2020 to which I replied that it’s still essential that FemCo speaks so people don’t misunderstand them.
Where is Chijioke?

But what I then got was drags such as “ingrate, idiot, fool, asslicke” etc. Some went as far as saying that I was greedy and expecting more money from
@feminist_co
and that couldn’t be further from the truth.

I have called my parents and we are willing to refund that money if need be. I never thought receiving fund from them amounted to not asking questions. I may be anything but I’m not ungrateful neither am I a coward.”

“$51,000 (N23 million) worth of Bitcoin was quietly withdrawn from the Endsars account, the feminist co has not responded or said what the money was used for. Aren’t they just like the leaders we’re fighting against”

“Feminist Co really used EndSars to cash out of poverty. I knew there was something fishy when Moe was trying to run to Dubai to celebrate her birthday, something she has never done in her life and FKAbudu (Presidor) was sending her gullible fans Jpegs from UK “

“The same FemCo abi Feminist Co that tried to accuse Rinu of stealing funds are the ones we cannot ask for accountability because you think we want to stain their white.

“Hello
@feminist_co
, the public are waiting for explanation for the $51,000 worth of Bitcoin you withdrew from your donation wallet on the 5th of this month silently. Always Crying about bad leadership when you’re worse than the leaders we have in charge of this country”

“Without support from
@feminist_co
it would have been very difficult for us to have organised the way we did in Benue during the #EndSARS protests, including the Candle Light Night we had in Benue for victims of the #LekkiMassacre.

Their impact was far reaching.”

“I see no reason why we can not discuss #FuelPriceHike and this news of Feminist co withdrawing $51,000 worth of Bitcoin from their donation wallet on the 5th of this month silently.