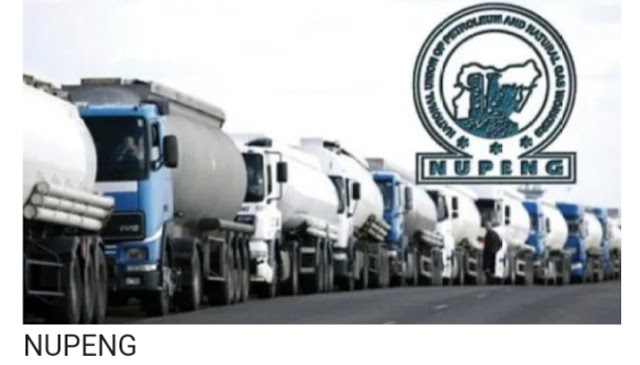 NUPENG , Nigeria Union of Petroleum and Natural Gas Workers on friday ordered tanker drivers to pull out of Lagos before Monday , August 7 .

NUPENG in a statement made by the National President of the NUPENG , Williams Akporeh revealed that the order was as a result of “failure of the state government to address some of its grievances”.

“The entire rank and file members of the union are deeply pained, frustrated and agonized by the barrage of these challenges being consistently faced by petroleum tanker drivers in Lagos State and are left with no other option but to direct the withdrawal of their services in Lagos State until the Lagos State Government and other relevant stakeholders address these critical challenges,” the statement read.

“It is sad and disheartening to note here that we had made several appeals and reports to the Lagos State Government and the Presidential Task Force for the decongestion of Apapa on these challenges but all to no avail.

“We resolved to embark on an indefinite strike beginning from 12 am, Monday, August 10, 2020 if there are no decisive and convincing actions from the Lagos State Government to address these concerns and challenges.”

Williams Akporeh alleged that their challenges in Lagos include extortion by security agents, traffic gridlocks hindering the drivers’ movements as well as harassment by hoodlums across the state.

“It is really disturbing and as well inexplicable that security agents who are expected to ensure free-flow of traffic and protection of road users now use their uniforms and arms to intimidate, harass and extort money from Petroleum Tanker Drivers.

“This reprehensible conduct is taking serious tolls on the psychological, emotional, and financial state of Petroleum Tanker Drivers and their capacity to effectively and efficiently deliver services to the nation.

“This menace must stop and the leadership of these security operatives in Lagos State must go all out to call their men to order with immediate effect. Every one of them should be content with their salaries and allowances rather than turning hapless Petroleum Tanker Drivers to money-making machines.

“For safety reasons, Petroleum Tanker Drivers cannot continue to struggle with these containerized trucks in these corridors considering the inflammable nature of the products our members carry and we cannot afford to undermine safety standards, procedures, and protocols in the course of our services.

“This is a situation that appears to have defied solution, considering the government’s non-intervention, lack of sensitivity over the years and collusion by those called upon by the Presidency to proffer solutions to the problem.

Consequently, as a socially responsible organization, we have made wide consultations with various leadership organs of our Union and with other key stakeholders in the oil and gas industry and therefore resolved to embark on an indefinite strike beginning from 12 am, Monday, August 10, 2020, if there are no decisive and convincing actions from Lagos State Government to address these concerns and challenges.”

NDDC Lists Projects Paid For Under Duress To Get Budget Approval