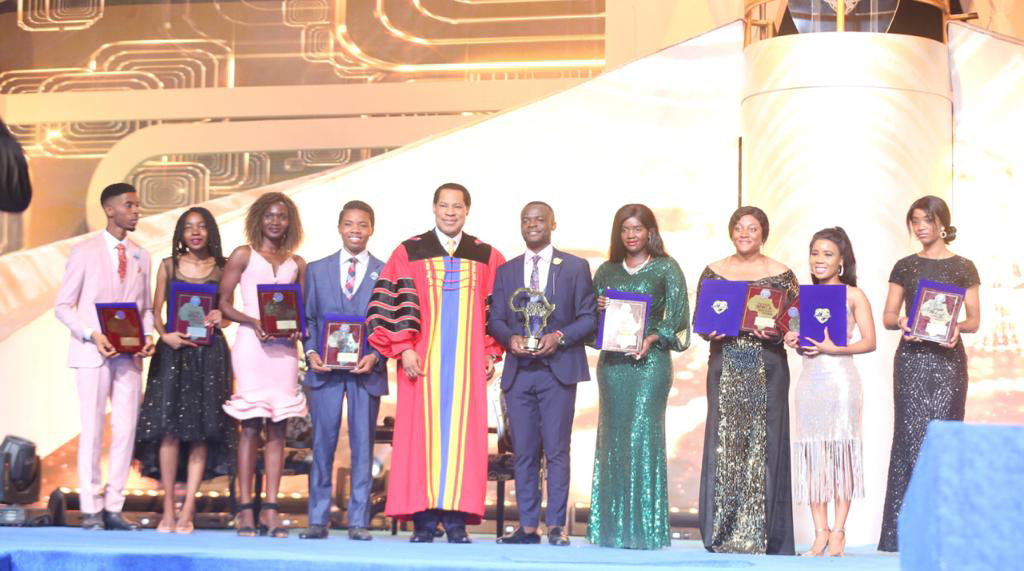 In its 8th Season, The Future Africa Leaders Awards (FALA) Foundation, an initiative of Rev. Chris Oyakhilome (PhD), founder and President of LoveWorld Incorporated, also known as Christ Embassy, is aimed at exploring and expanding the leadership potentials in Africa and for Africa. The award is also meant to identify, celebrate and support young Africans who have demonstrated exemplary leadership by impacting their generation positively through education, youth empowerment and mentoring through other projects aimed at building young people and preparing them for a positive future.

This year, 30 individuals from 20 African countries were nominated for the highly-coveted global recognition awards but 10 young Africans between the ages of 16 and 23 got the coveted awards with pops and pageantry.

The Award ceremony that took place during the 31st night service at the LOVEWORLD crusade ground, Aseese Lagos State, produced a ultimate Star Award Winner, a 22-year-old social activist, Gwei Michael Wawa from Cameroon with a token of $25,000 as a show of encouragement and $10,000 each for other nominees from the founder and chief motivator of the Future Africa Leaders ‘Awards, Rev. Chris Oyakhilome (PhD).

With a mission to identify, explore, celebrate, train and support African youths who have demonstrated exemplary leadership qualities in various field of endeavors.

And a vision to raise financial, political, technological, intellectual and economic giants who are driven by the challenges in Africa to proffer sustainable solutions

FALA’s goal is to impact African youths all around the world through their mentorship programs that enable the youths to tackle prevalent challenges in Africa.

At the media unveiling, nine star winners and the ultimate winner for year 2020, took the world through their impactful programmes and dreams for the African continent one after the other, with a detailed process on how they have been impacting their fellow Africans.

Coordinator of the award, Mrs. Jumoke Akinsanya said, “FALA awards is notably established to encourage different endeavors of African youths and also to encourage people who are looking up to them in their communities.”

She therefore charged, youths to key into this initiative and be a agent of change in their various communities. She equally charged them to take the opportunity to showcase their God’s given potentials, dreams and aspirations to the world when the 2021 program kicks off.

How The FALA Star Winner For 2020, Gwei Michael Wawa from Cameroon emerged

Gwei Michael Wawa is a 22-year-old social activist, who is passionate about scientific and technological solutions for Africa’s advancement.
He started an NGO called ‘Youth Empowerment through Science and Technology’ (YEST). The organization held 34 Conferences and 14 Seminars that directly impacted over 18,000 young people.

In collaboration with the College of Technology, Michael organized a mega technological trade fair, with professors in the technology/engineering sectors of various universities invited as judges to review and award over 15 new inventions, and also to sensitize over 2,000 secondary school students on continuous innovation.
He partnered with Nervtek, a tech-based NGO, to sponsor and organize a Teck Community Challenge, where 200 students from 5 tertiary institutions in Cameroon showcased their skills through design and implementation of novel hardware solutions like power banks, smart dustbins, automatic temperature/humidity regulator, soil moisture detector sensor, a robotic arm, and a metal detector. The top 3 winners received incentives worth over $1,000 (US) each and accessories to upgrade their inventions.

Challenged by the high demand for blood in Cameroon, Michael created a Digital Health Service platform called YEST-IN DHS, which provides 24-hour online free consultation and supports services for hospitals, health centers, and non-profit organizations; with special attention to helping them manage their blood donation process digitally and networking blood donors, hospitals, blood recipients, and health care workers. Over 10,000 people have registered on the website, with more than 2,400 liters of blood donated in just 5 months of operations. This solution has been adopted by 118 hospitals, health centers, and health organizations across the country.

Due to the COVID-19 lockdown, schools in Cameroon were closed for 6 months. Concerned, Michael instituted a 3-month training project called ICT4Teens and 150 teenagers were trained and equipped in media & information literacy, robotics, web development, programming and computational literacy. Michael initiated an Agricultural Value Chain Project (AVCP), through which he established a 2-hectare plantain farm that engaged 85 University students who worked with him to create a multi-crop flour-making machine.

AVCP is currently being used as an internship program by universities for their agricultural and technological interns. For the International Youth Day, Michael mobilized over 200 young people and partnered with a local dirt handling company to carry out the biggest cleanup campaign in his city. Michael, for his exemplary accomplishments, has notable awards and commendations from the governments of Japan, Brazil, Rwanda, Kenya, Chad, Saudi Araba and Ethiopia.