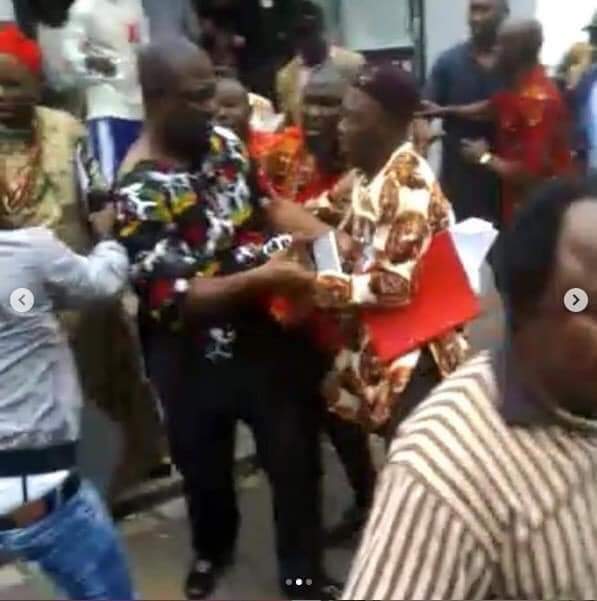 They have also served their sentences.

The convictions, which were handed out in August, went completely under the radar but diplomatic sources in Germany told TheCable on Friday that the four IPOB members were prosecuted for physical assault and sentenced to 20 days of labour “without pay”.

The Nigerian embassy did not immediately respond to inquiry for the identities of the convicts.

In 2019, the serving senator from Enugu state was beaten up by Biafra agitators in Nuremberg at an event organised by “Ndigbo Germany”.

IPOB — which Nigeria had declared a terrorist organisation — claimed responsibility for the attack which it said “should serve as a warning” to Igbo leaders “that any day we find them in a public event abroad, they will be humiliated”.

Nigerian government officials later informed us that the Bavaria state police had identified four of the attackers in the course of their investigation.

The Nigerian embassy also mounted pressure on the German federal authorities to bring the attackers to justice following the initial reluctance of the state police to investigate the assault which was captured on video.

CONVICTED BUT NOT DEPORTED

Contrary to social media rumours, no IPOB member was deported.

Under section 102 (1), chapter 3, of the German criminal code, attacks against organs and representatives of foreign states are punishable with fines and imprisonment.

It states, “(1) Whosoever commits an attack against the life or limb of a foreign head of state, member of a foreign government, the head of a foreign diplomatic mission who is accredited in the federal territory while the victim is in Germany in his official capacity shall be liable to imprisonment not exceeding five years or a fine, in especially serious cases to imprisonment of not less than one year.

“(2) In addition to a sentence of imprisonment of at least six months, the court may order the loss of the ability to hold public office to vote and be elected in public elections (section 45(2) and (5).”

However, Ekweremadu was not on an official duty in Germany when he was attacked.

The Nigerian embassy source told us that two of the attackers had initially filed an appeal against their conviction but later withdrew it.

“It was only the four persons identified that were sentenced to 20 days of labour without pay. The sponsors were not identified so they were not prosecuted,” the source said.

Although Ekweremadu could institute a civil case against the attackers, we understands he is yet to do so.

A source close to the senator, however, said the lawmaker has no interest in the issue, although he is aware of the conviction.

Emma Powerful, IPOB spokesman, did not immediately respond to TheCable’s enquiry on the issue.