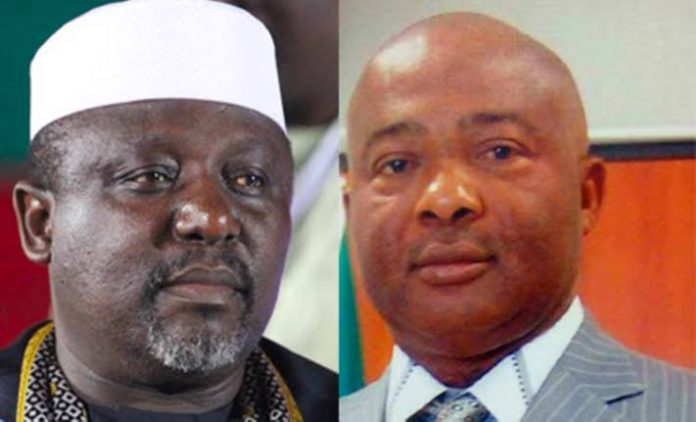 Hope Uzodimma has revealed how his relationship with Rochas Okorocha cracked, he said the Okorocha wanted him to do something he refused to do.

Imo Governor, Hope Uzodimma, has revealed that he fell out with former governor, Owelle Rochas Okorocha when he refused to grant his request to dissolve all the investigation panels set up to probe his administration by the immediate past Emeka Ihedioha administration

The governor made the startling revelation while briefing APC party leaders at an enlarged meeting of the state caucus of the party, the first in over 8 years, held at the government House Owerri on Saturday.

Uzodimma also used the opportunity of the meeting to give a scorecard of his administration since it was sworn in on January 15.

He said he refused to grant Okorocha ’s request on the dissolution of the panels because he believed that the mood of Imo people was in favour of the probes. He also revealed that he advised the former governor that if he had any Imo people’s property in his possession he should return same.

The governor said Okorocha’s second request was for Dan Nwafor to be left as the state chairman of APC because of his ambition to run for presidency in 2023, a request he also flatly rejected.

“I asked him if you want to run for president have you asked me what I want to run? I told him that the party rules and the laws of the land were there to guide everyone on the matter,” the governor declared

Uzodimma also used the opportunity of the caucus meeting to appeal to party chieftains to agree for the adoption of a consensus candidate for the upcoming okigwe senatorial elections saying that would save contestants avoidable expenses and also shield the party from internal crisis.

On his stewardship, the governor said inspite of the initial teething challenges he met on ground, including empty treasury and the absence of a hand over note, his administration has done quite well with the automation of the payroll system, rehabilitation of Otamiri Water Works and Adapalm and the construction of many roads, some of had been commissioned.