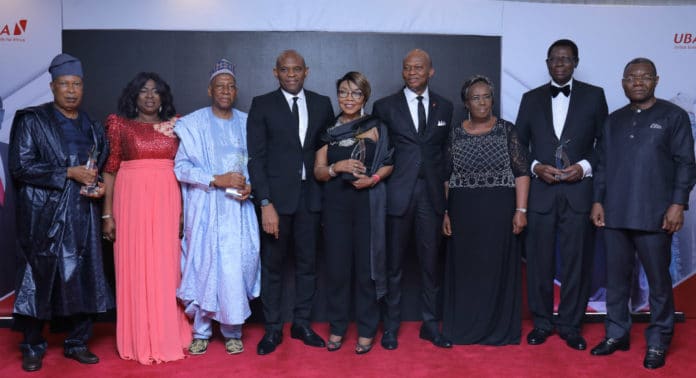 United Bank for Africa (UBA) Plc at the weekend honoured four retiring directors while restating its commitment to ensuring strong corporate governance across the group.

The four directors who had collectively served the bank for over 40 years, were celebrated for their remarkable contributions to the group over the years.

The retired non-executive directors Mrs Rose Okwechime, Ambassador Kunle Olumide, Alhaji Jaafaru Paki and Mr. Yahaya Zekeriwere treated to a cocktail and dinner party attended by top players in the private and public sectors at the Transcorp Hilton Hotel, Abuja at the weekend.

Speaking at the event, the Group Chairman, Tony Elumelu, commended the contributions of the retiring directors to the Banks corporate governance policies and the actualisation of its goals and targets.

The Banks institutionalised corporate governance has attracted more investment, increased its income base, ensuring that UBA impacts the economic and infrastructural developments in Africa.

We are grateful for the contributions of the retired directors and their colleagues on the board, Elumelu said.Without the support given by the retiring directors, we may not be where we are today.

Their investment and advisory services with the legacy Standard Trust Bank which later grew into todays UBA, cannot be understated. Elumelu said.Also speaking at the event, the Group Managing Director, Kennedy Uzoka, said: Tonight, we are happy but not too happy.

We are happy because employees of this financial empire have come together to celebrate some great people who have contributed to building the franchise that we have today.