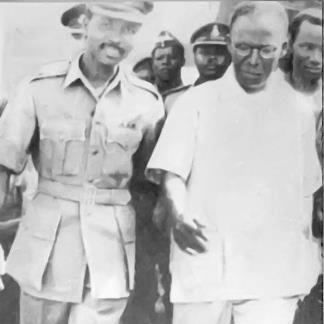 Igbos were massacred during the Biafra war which lasted from 6 July ,1967 to 15 January, 1970. The war took at least 3 million Igbos lives.

Accusing fingers have for a long time been pointed to the northerners as the brains behind the massacre but Femi Fani-Kayode in this article explains how Yorubas of the old mid western region of Nigeria also contributed in the killings of Igbos during the war.

NAIJA NEWS NG brings you the article which he titled ‘A PAINFUL AND BITTER TRUTH’  . Read Femi Fani-Kayode’s words below :

A PAINFUL AND BITTER TRUTH
One of the greatest fallacies in Nigerian history is that only northerners slaughtered the Igbo. This is false. We ALL did.
It was not the northern leaders that told the world that “starvation was a legitimate weapon of war” and that commiting the greatest genocide in African history against innocent women and children was acceptable in an armed conflict, it was South Western and Mid- Western leaders that did that.
It was not a northerner that travelled to the United Nations during the war and tried to defend and justify our heinous and barbaric war crimes, it was a great son of the Mid-West that did that.
The blame for what was done to the civilians of Biafra and the attempt to rationalise and defend it goes to us all.”
FFK said we must all ask God for forgiveness what we did to the Igbos during the civil war.
“We must ALL ask God for forgiveness for what we did and we must all take our fair share of the blame for what was done to the Biafran civilians during that war.
History is an intellectual exercise and there can be no room for subjectivity or emotions in it. Historical facts are sacred and historical opinion is cheap. Again history is not for the unduly emotional because it is not a respecter of persons. We must always strive to speak the truth and bring to the fore all the facts when we are discussing it. Nothing ought to be hidden.
Permit me to give an example. Sir Winston Churchill, the greatest leader that the United Kingdom ever had and the man that stood firmly against Adolf Hitler and who, together with the Soviets and the Americans, saved the world from the evil of the Nazis, was also directly responsile for the death of 3 million Bengali Indians who he starved to death at the stroke of a pen.
When asked why he did this he said that it was because the British troops needed the food and that the Indians ought not to have been “breeding like rabbits”.
Great men and iconic heroes in history almost always have their own dark side too and Nigeran leaders, whether southern or northern, are not exempt from that.
In our history there are no angels. Every single one of our notable leaders, both military and civilian, during the course of our civil war has innocent blood on their hands and we cannot shy away from it. We must accept our fair share of the blame for what was done to those innocent women and children and to those defenceless civilians.
Until this is done and there is true repentance and reconciliation I do not believe Nigeria can make any meaningful progress or move forward.
Until this is done the cycle of genocide, ethnic cleansing, mass murder, terrorism, violence and divine retribution that we have witnessed all over our country over the last 50 years and even more so over the last five years, will not stop.
This is because the innocent blood that we collectively shed during the civil war is calling to the God of Heaven for the blood of our own innocents in revenge.
Is it by accident that the two most deadly terrorist organisations in the world today, Boko Haram and the Herdsmen, together with ISWA are now freely operating in Nigeria killing hundreds of thousands of innocent Nigerians over the last few years?
Why have we been afflicted with this evil and why has it not affected our neighbouring countries in a similar manner? The answer is obvious and it is essentially a spiritual affliction.
It is time for us to come clean, own up to our faults, confess our sins, make the necessary reparations and thereby put a stop to this evil cycle of fratricidal butchery, bloodshed and violence.
No public figure in our history is completely good. Some are mostly good with a little bad whilst others are mostly bad with a little good. And this is the same all over the world.
Human beings are not infallible and they are not angels: they all have their short-coming and faults, they have all made bad choices, they all fall short of the glory of God and they have all made their own fair share of mistakes and been involved in one uncharitable act or act of wickedness somewhere along the line and over the years. This is especially so when it comes to men of power and leaders.
Where we get it wrong and when we have joined hands with others to commit crimes against humanity we must be courageous and gracious enough to accept it, take responsibility for it and own it and we must be ready to display a reasonable level of remorse and compassion and do justice to those that were our victims. As they say, where there is no justice there can be no peace.
What we did to the Biafran civilian population between 1967 and 1970 cannot be swept under the carpet or forgotten. We can ignore it for as long as we like and pretend that it doesn’t matter but as long as we do so the ghosts of the 1 million children and 2 million innocent civilans that we butchered and slaughtered in the most cruel and heartless manner will continue to plague and haunt our nation for many more years to come.