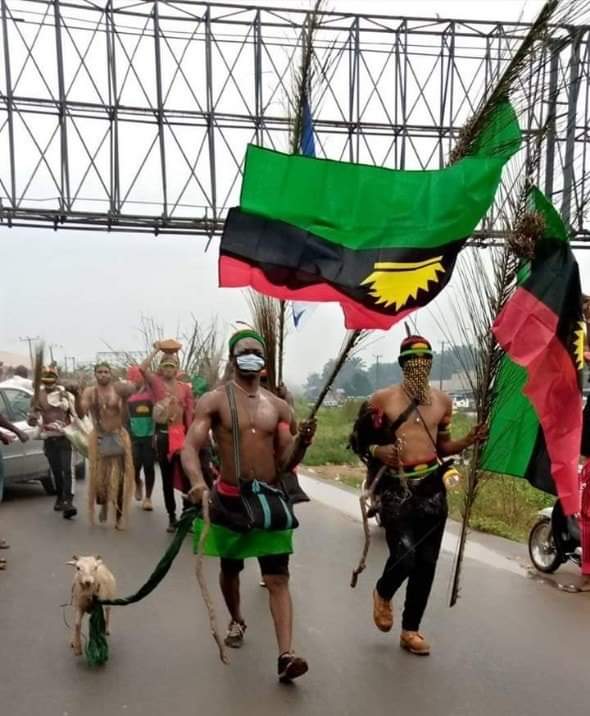 IPOB member has accused Nnamdi Kanu of smiling to the bank with Biafra agitations and the killings of members.

The woman called , Akpangbo, who played key roles in IPOB movement in Biafra land was recently suspended , while speaking to Chigozie who also just got suspended revealed dirty details about the group and its leaders .

She narrated how the funds members generate have been squandered and how Nnamdi Kanu makes huge money with IPOB agitations.

NAIJA NEWS NG brings you this delicious  audio conversation . Read her words below :

“Nnennaya Anya called me to check finance, I checked and found we generate good money monthly like N30 million monthly. They suspended me for advising that they should use N20 million to solve their problems over there and use N10 million to sort coordinators by giving them stipends and financing every department in Biafra land to work . The leaders collect monthly salary, Uche Mefor and a lot of them overseas are paid monthly. The advise got me trouble , they asked me if it is what I said I said yes . They suspended me after demanding that I go to Arochukwu or they put me in a condition I won’t like.
After Python Dance Fineboy sold us to Fulani herdsmen. We are now Alliance for New Nigeria, all of them abroad knows, that’s why they are forcing people to go to Arochukwu to take oath so that when the time comes that we are no longer answering IPOB nobody will talk.

Nnamdi Kanu’s wife Uchechi Okwu Kanu ‘s father owns UPP party .
They suspend anyone who doesn’t go to Arochukwu.
IPOB which is led by Nnamdi Kanu and Uche Mefor has been sold to Alliance for New Nigeria.

2- All those that formed Radio Biafra with Nnamdi Kanu must come together, which they have done.

The money we generate in IPOB has been eaten . So they want IPOB meetings to fall so that nobody will account for it.This is what is at stake now.

Listen to the voice conversation below :

OHANAEZE NDIGBO : Uzodinma And Nwodo Are Working Against Buhari