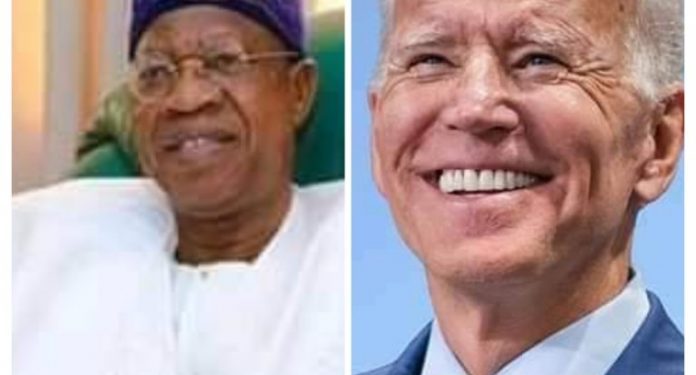 Nigeria Minister of Information and Culture, Alhaji Lai Mohammed has been quoted to have said Buhari’s government will support Joe Biden because of Trump’s support for IPOB .

NAIJA NEWS NG gathered that the quotes credited to him says Nigeria will donate $600 million to Joe Biden’s campaign as a move to show support and spite Trump.

“IPOB is a well known terrorist group which we have blacklisted in our country. This very group is more deadly than Boko Haram because they want to divide our nation.

“We have criminals like bandits and Boko Haram but they are not fighting to divide nigeria but just to make money but IPOB whom we are yet to get their source of finances are spending over $90000 monthly to make sure they destroy our nation.”

“We have written to all government of the world to proscribed them but it is obvious that American president Donald Trump is the one aiding these terrorists.

“He even gave them the chance to Protest in their so called one million march, fortunately for us, Corona virus stopped it!.

“We are going to show Donald Trump that Nigeria is a country he can’t mess up with unlike how he did to Iran.

“We will support Joe Biden with $600m to make sure he take over America and help us in dealing with these terrorists!.

“We will pay Trump back in less than a month from now and we are also charging NIGERIA media to start from the first week of October to campaign for Joe Biden!” He stated!.”

We Want Biafra Not An Igbo President – IPOB Declares