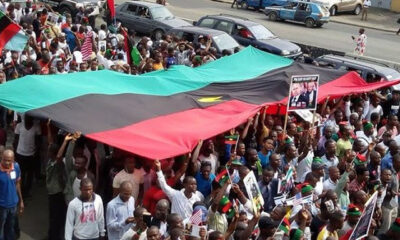 The Nnamdi Kanu led Indigenous People of Biafra has cleared air on the rumor that its members detonated the bomb at Governor Wike’s father’s church.

Recall that dynamite was detonated at a church steered by Wike’s father in Port Harcourt, the state capital.

The State Police Command had confirmed development to DAILY POST.

This is the second time the Christian Universal Church International located at 25, Azikiwe Street Mile 3-Diobu, Port Harcourt will be attacked within one month.

The Church was first attacked by a set of hoodlums during the End SARS crisis as protesters had pelted stones at the worship centre.

However, IPOB’s spokesman, Emma Powerful accused Wike of peddling propaganda against the group.

Powerful, in a statement he signed, maintained that IPOB does not indulge in explosives.

The statement reads: “The attention of the Indigenous Peoples of Biafra (IPOB), ably led by our great Leader, Mazi Nnamdi Kanu, has been drawn to the fabricated and state-sponsored propaganda peddled by Nyesom Wike and his co-travelers that peaceful and innocent members of IPOB are responsible for an alleged attack on his father’s building on Saturday night.

“We want to state categorically and for record purposes that IPOB knows nothing about the said purported attack. We do not indulge in explosive devices and we do not have any intentions to do so in the near future.”