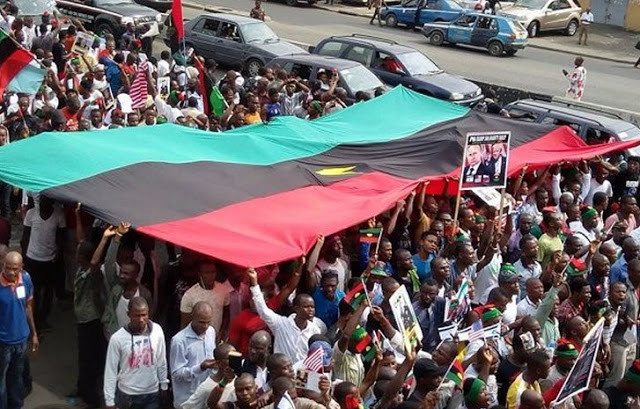 NAIJA NEWS NG reports that the Biafra actualization group has said it will not look the other way after suspected Herdsmen killed a man , his pregnant wife and others in Aziko community of Bayelsa State.

IPOB Spokesman, Emma Powerful, in a statement released on Tuesday declared that the Indigenous People Of Biafra will retaliate the killings in full measure.

Powerful said what is happening in Southern Kaduna “where herdsmen, Boko Haram, bandits and other groups are slaughtering innocent Christians without any hoot by the government is an indication that Nigeria is already a failed state.”

The official declared that IPOB, “is ready to repel them from Biafra land no matter the cost.”

IPOB condemned the, “atrocity and the persistent killings in Biafra land. We assure the perpetrators of this heinous crime and their sponsors that they will regret their actions very soon.”

The IPOB spokesman wondered why the world “is still keeping quiet over the ongoing genocide in Biafra land.”

He noted that, “herdsmen footsoldiers and their sponsors behind this evil will never go unpunished.”

Powerful said they would not allow “blood suckers to go free with these barbaric killings. We won’t allow these vampires to replicate their atrocities in Southern Kaduna in any part of Biafraland.”

The statement warned that, “no part of Biafra or even the country will be a safe haven for them anytime we start paying them back in their own coin.”

He stressed that the present generation of Biafrans was not the same as those of 1967 and 1970.

It urged Biafrans to be prepared, “because the right time for revenge is fast approaching, their continued mayhem must be resisted.”