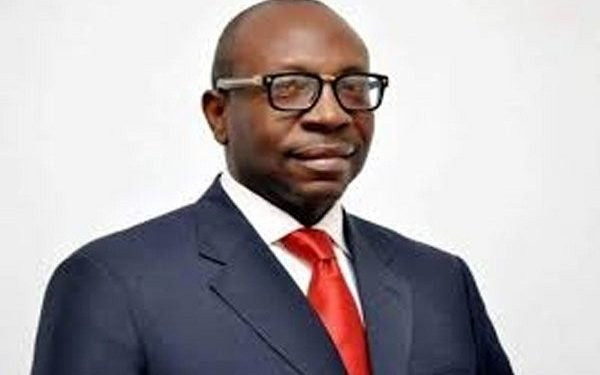 Osagie Ize-Iyamu the All Progressive Congress gubernatorial candidate has explained why Adams Oshiomhole insulted him during the 2016 gubernatorial election.

Ize-Iyamu said during electioneering period opponents say all sorts of unprintable things about their opponent , he also said Oshiomhole had to do so because he was selling a bad product, Godwin Obaseki .

In an interview with Vanguard Newspapers, Ize-Iyamu said Oshiomhole has said great things about him in the past. Read below :

“Of course, he needed to abuse me, especially when he didn’t have a good product (Obaseki). You can imagine how Governor Obaseki started his campaign for the forthcoming election.” ALSO

“They placed a big screen on Ring Road in Benin, where everybody passes. One would have thought that all he would be playing on that kind of screen are his administration’s achievements in the last four years.

“Yes, Oshiomhole threw punches at me in 2016, but people tend to have a short memory. Oshiomhole was at Ben Idahosa University, when I was being given a doctorate and he spent over one hour praising me for my contributions in his government and the role I am playing in the state.

“Oshiomhole also came to my farm at one time, when I was graduating students and he listed the roles I was playing in the state.

“At my 50th birthday, there was no word he didn’t use to describe me, including the fact that if he wants to mention those who have helped him to succeed in government, there is no way my name will not be there.

“I am sure that those who had gone through campaigns before will tell you that people will call their opponents all sorts of names during electioneering campaigns, but if you allow those things to border you, they will distract you.”

We Are Appalled By The Worsening Security Situation – Nigerian Governors Write