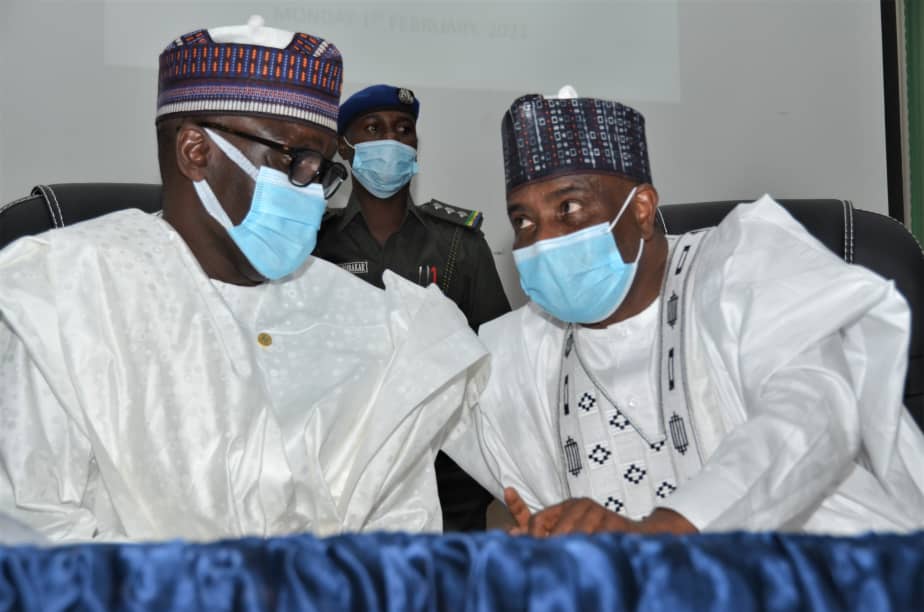 The Group Managing Director of the Nigerian National Petroleum Corporation (NNPC), Mallam Mele Kyari, has commended President Muhammadu Buhari for giving the Corporation’s Management free-hand to deliver on its mandate, saying that he remains the only president that has never interfered in the operations of the Corporation.
Mallam Kyari stated this on Monday in Sokoto while delivering the Usmanu Danfodiyo University’s 2021 First Quarter Public Lecture Series titled, “Navigating Energy Transition and the Imperatives of University-Industry Collaboration.”
He said the current crop of NNPC Management was so privileged to have a President who never interfered in what the NNPC does as a Corporation.
“That is very unprecedented, and it has gone a long way to help us deliver on our mandate, especially the drive towards domestic gas utilization,” Kyari stated.
The GMD tasked Governments and institutions on the African continent to adopt technology and innovation to achieve energy sufficiency and its economic multiplier effect on their people.
“African Governments and institutions must rise to the occasion to leverage technology and innovation to support energy sufficiency, industrialization, job creation and economic growth,” Kyari emphasized.
He revealed that the NNPC as Africa’s biggest national oil company which is already building on the convergence of new technologies and innovative business models, was set to play an important role in the future of energy.
“NNPC has set the necessary machineries to lead Africa in transition to low-carbon energy and renewables. We are taking firm position in this transition by institutionalizing the necessary enablers for success,” he stated.
The GMD added that in line with this drive, NNPC has established a Renewable Energy Division and completely transformed the NNPC Research and Development (R&D) Division to NNPC Research, Technology and Innovation Centre as part of its key initiatives to transit to an Energy Company of Global Excellence.
He noted that the oil industry alone cannot drive substantial innovation without sustained collaboration with universities, research institutes, manufacturers, policy makers and regulators.
He said NNPC welcomes beneficial relationship with the academia and industry experts who demonstrate capacity for productive research and innovation in the energy sector.
According to him, energy transition cannot be complete without the right investment climate, capital, effective regulation, stakeholder’s commitment, supportive infrastructure, and an innovative business environment that can accommodate the anticipated changes.
The NNPC helmsman observed that further diversification of energy sources will improve global access to energy and reduce the absolute number of people without access to energy, especially in developing countries.
He said the new energy transition must be fashioned towards creating a balanced landscape that supports the development and energy needs of diverse groups of people across the planet.
He maintained that as global energy consumption grows from 2018 levels by about 50% by 2050, oil and gas will continue to be a crucial component of the world’s future energy because the world will keep burning significant proportion of fossil fuels to sustain the anticipated progress and growth, especially in Asia and Africa.
Also speaking at the occasion, the Chief Host and Governor of Sokoto State, Rt. Hon. Aminu Waziri Tambuwal, said the NNPC under the GMD was being repositioned to align with the realities of tomorrow, especially as the oil industry awaits the passage of the Petroleum Industry Bill (PIB) by the National Assembly.
Governor Tambuwal also called on the current National Assembly to ensure the passage of the all-important bill, stressing that the lawmakers must not allow the efforts of the GMD and his colleagues within the industry to go in vain.
Earlier in his remarks, the Chairman of the occasion and Governor of Kebbi State, Atiku Abubakar Bagudu, said NNPC under Mallam Kyari has recorded remarkable strides, one of which was the tireless efforts seen in transforming the Corporation into a knowledge-driven organization through collaboration with the academia and other stakeholders.
On his part, the Vice Chancellor of UDUS, Prof. Lawal Suleiman Bilbis, who thanked the GMD for honouring the University’s invitation despite his busy schedule, said the University was open to partnership with the Corporation, especially in the area of oil exploration in the Sokoto Basin.