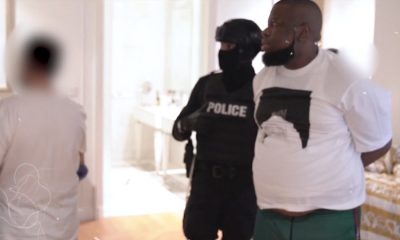 Hushpuppi the Nigerian Dubai based fraudster and his partner in crime, Olalekan Jacob Ponle a.k.a Woodberry have been extradited.

The fraudulent duo have been extradited to United States of America, Dubai Police announced. The announcement was made on Thursday via its official Twitter account.

NAIJA NEWS NG learnt that the Director of the Federal Bureau of Investigation, FBI, Christopher Wray showered praises on Dubai Police General Headquarter for the role it played in the arrest of the two Nigerians and their gang members.

“The Director of the Federal Bureau of Investigation, FBI, Christopher Wray has praised the exceptional efforts made by the United Arab Emirate, represented by the Dubai Police General HQ, in combating transnational organized cybercrime including the recent arrest of Raymond Igbalode Abbas, known as “Hushpuppi” and Olalekan Jacob Ponle known as “Woodberry” who were taken down in operation “Fox hunt 2”.

“He also extends his appreciations to Dubai Police for their cooperation in extraditing the wanted criminals, who committed money laundering and multiple cybercrimes, to the United States,” the statement read.

You would recall that Hushpuppi, Woodbery and ten other Africans were arrested by Dubai Police for cyber crime in a special operation called “Fox Hunt 2”.

Hushpuppi who was arrested for targeting companies and individuals to defraud them was questioned by prosecutors at the Bur Dubai section.

The Senior prosecutor also explained how the fraudsters carried out their wicked acts, he said they sent out ’email addresses almost identical to those of legitimate companies, targeting customers of these companies, with the purpose of diverting payments to themselves.’

Read the full statement by FBI below :

“FBI thanks Dubai Police for arresting and extraditing “Hushpuppi” and “Woodberry”

The Director of the Federal Bureau of Investigation (FBI), Christopher Wray has praised the exceptional efforts exerted by the United Arab Emirate, represented by the Dubai Police General HQ, in combating transnational organised cybercrime including the recent arrest of Raymond Igbalode Abbas, known as “Hushpuppi” and Olalekan Jacob Ponle aka “Woodberry” who were taken down in operation “Fox Hunt 2”.

Recently, the Dubai Police has arrested the two wanted fraudsters, “Hushpuppi” and “Woodberry” along with ten African cybercriminals in a special operation dubbed “Fox Hunt 2”.

The operation took down the suspects for committing crimes outside the UAE, including money-laundering, cyber fraud, hacking, criminal impersonating, scamming individuals, banking fraud and identity theft.

The suspects were caught in a series of synchronised raids by six SWAT teams from Dubai Police who foiled the gang’s bid to deceive many people from around the world and steal their money.

The director of Dubai CID, Brigadier Jamal Salem Al Jallaf said the raid resulted in confiscating incriminating documents of a planned fraud on a global scale worth AED 1.6 billion ($ 435 million).

The gang was brought to book after analyzing credit cards and documents that nailed them .