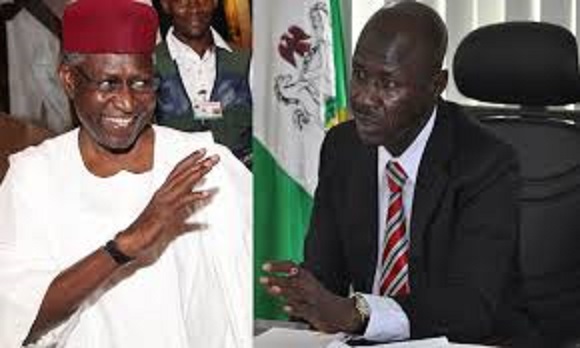 Ibrahim Magu the EFCC Acting Chairman has been suspended by a panel set up by the Presidency . He was compelled to answer questions on Monday.

Following Ibrahim Magu’s inability to answer the questions satisfactorily, he got the hammer. The panel was led by retired president of Appeal Court, Ayo Salami . He was investigated for allegations of gross misconduct.

The news of the arrest of the former EFCC boss was denied by DSS and EFCC yesterday. EFCC claimed that Magu was not arrested, that he made himself available for questioning but Magu was grilled and didn’t return home . He was detained at the FCID in Area 10, Abuja.

Since the news of his suspension broke,Nigerians started linking the death of late Abba Kyari, the former Chief of Staff to Buhari to Magu’s suspension NAIJA NEWS NG learnt .

They say Kyari seems to have protected a lot of his men from the hammer they deserved . Read tweets below :

Nigerians: “Can’t you see that since Abba Kyari died, Alot of this corrupt politicians have been exposed?”

Mr. TDH @ZedexBoss
“Abba Kyari was the Van Dijk of the presidency. He died and the defense for Oshomole, Tinubu and Magu was volatile.
Moral of this story: Never play only Van Dijk in defense without Alison.”

A.V.A.T.A.R
@AZAMANIAC
For say them no catch this one him or her self for follow condemn Hushpuppi oooFace with tears of joy

Abba kyari to Nigerians right now Nerd face
Biko Nigerians can u let the man Rest In Peace.
@DuruchibuzorE
“So Abba Kyari was the masquerade behind Magu all along.”

Retson Tedheke @retsonbiz
“OH ABBA KYARI! How I Was So Wrong About You! You Have Become An Esemo! Forgive The Naivety of Your Son My Ancestors! What is in Governance That Makes Great Men Weak and Weak Men Smart? I Know We Are Not Well… But Na Like This We Go Dey Dey?”

“Abba kyari died just 2 months ago and so much has happened politically… It got me thinking who is really running this country????”

Words On Street
@DwordsOnStreet
“Let wait and see, Abba Kyari really hold villa very well. Pls can we all call on Aunty Kemi to safe us from all this peopl”

HUSHPUPPI : Why Nigerians Protested At The US Embassy