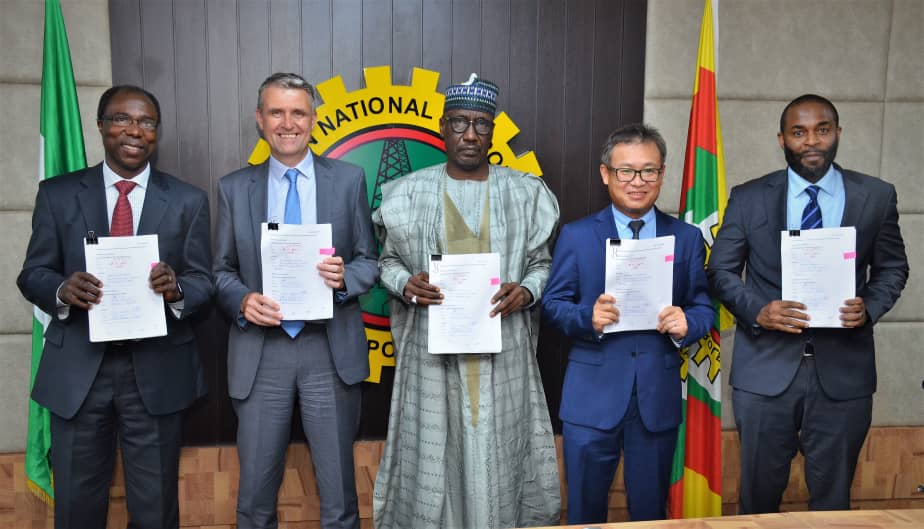 The agreements which are part of the Corporation’s gas commercialization programme involve Total Exploration and Production Nigeria (TEPNG), China National Offshore Oil Corporation (CNOOC), South Atlantic Petroleum Nigeria Limited (SAPETRO) and Prime 130 Limited.
The sale structure under which the agreements were executed is designed to provide a clear delineation for the allocation of the gas sale proceeds to all the participating parties, including midstream handling and transportation.
“This a very proud moment for all of us. I understand all the delays, they are completely unavoidable. It is desirable for us to have full alignment of all parties before we proceed. The end result is that there would be clarity around our relationship and we would be unlocking resources that have been on the table for many years. We now have a clear line of sight around gas revenue of up to $250million dollars, and also another $510 million dollars that is applicable to the rest of us,” Mallam Kyari enthused.
He noted that apart from the revenue boost, the agreements have also opened up an opportunity to have the dispute settlement agreement for the OML 130 PSC and ultimately to have a renewed production sharing contract which would now guide the relationship going forward.
On the recently passed Petroleum Industry Bill, the GMD assured the parties that the fiscal terms proposed in the oil reform legislation remain some of the most attractive in the global oil and gas industry, noting that investors have no cause to worry.
In his response, Mr. Mike Sangster, Managing Director of TEPNG, expressed delight at the signing of the agreements, adding that the parties were committed to the terms of the agreements.
He commended the GMD and the NNPC for their vigorous pursuit of the aspiration of the decade of gas programme of the Federal Government.
OML 130 is a deepwater block located 130kilometres offshore Niger Delta at water depths of well over 1000metres. The block contains the producing Akpo and Egina fields and Preowei discovery.
The asset originally known as Oil Prospecting License (OPL) 246 was awarded in 1998 to SAPETRO and was later converted to OML 130 in February 2005 after commercial discovery of oil in Akpo and Egina in 2000 and 2003 respectively.
At conversion, the Federal Government, represented by NNPC, exercised its rights as concessionaire of the block in April 2005 whereby it entered into a PSC with SAPETRO as contractor and TUPNI as operator for 50% of the interest in OML 130 PSC and a Production Sharing Agreement (PSA) between TUPNI, SAPETRO and PRIME 130 for the other 50% interest in the OML 130 block.
In April 2006, SAPETRO farmed-out 90% of its Contractor interest in the OML 130 PSC to CNOOC.
The remaining reserves on the block are estimated at One billion barrels of liquids and over 1.2trillion cubic feet of natural gas.
Gas from the block was transported and sold to the Nigeria Liquefied Natural Gas (NLNG) via the Akpo-Amenam Gas Pipeline and was funded in kind by the PSC under the Gas Utilization Agreements (GUAs) for a consideration of 1TCF of gas which was achieved in July 2018, thus terminating the GUA.
It was projected that the parties would agree on the post- 1TCF regime for the monetization of the gas upon the expiration of the GUA. However due to underlying disputes on the PSC and other reasons, the post-1TCF regime was never agreed upon.
The new agreements offer the gas sales framework for the 100% volume under the PSC and the PSA.