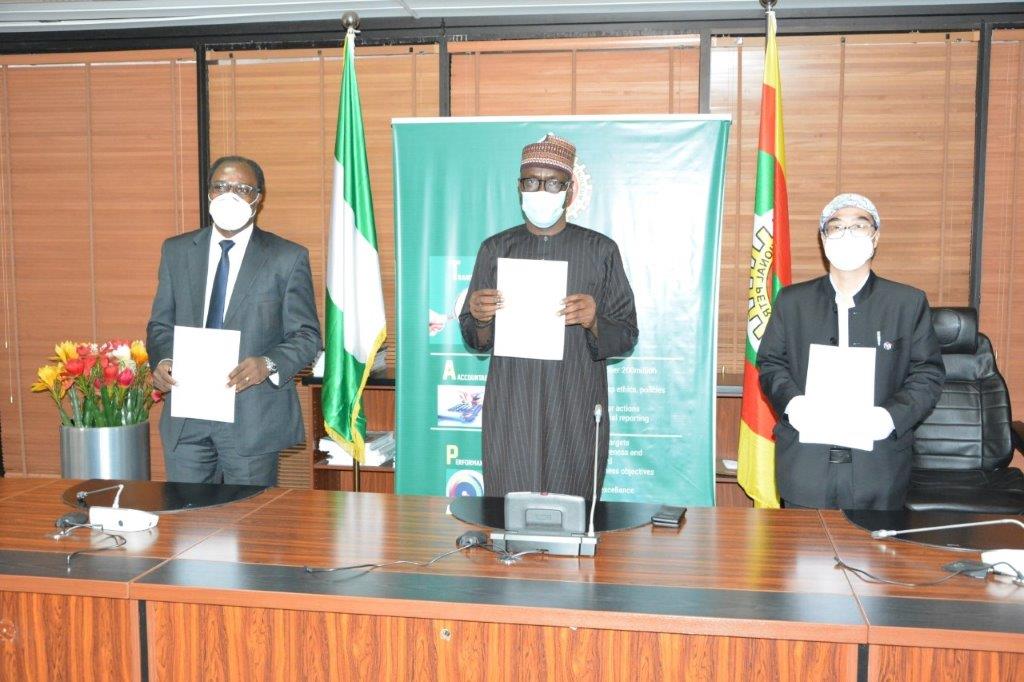 In its bid to meet the target of revving up production to 3million barrels per day and unlock gas revenues to the tune of about $225 million in the short term and $510million in the long run for the Federation, the Nigerian National Petroleum Corporation (NNPC) has reached an accord with its partners, China National Offshore Oil Company (CNOOC) and South Atlantic Petroleum (SAPETROL), to settle all outstanding issues surrounding the development of Oil Mining Lease, (OML) 130.

Speaking at the signing of Head of Terms (HoT) agreement with the partners Thursday at the NNPC Towers, Abuja, the Group Managing Director of NNPC, Mallam Mele Kyari, said the deal was part of the Corporation’s PSC Dispute Resolution and Renewal Strategy of 2017 aimed at securing out of court settlement of all disputes around the 1993 Production Sharing Contracts (PSC) and agreeing on terms for their renewal.

A press release by the Corporation’s Group General Manager, Group Public Affairs Division, Dr. Kennie Obateru, explains that the dispute arose from recognition of certain cost and discordant interpretation of the fiscal terms of the PSC by NNPC and the Contractor parties.

With the resolution and signing of the Head of Terms (HoT) document which sets out the terms agreed in principle between parties in the course of negotiations, apart from unlocking over $225 million of gas revenues, it will also enable settlement of renewal fees and create an environment conducive to further development of OML 130 with associated benefits to the Federation.
“We are doing this with every other partner in the PSC dispute, we believe that we can close this engagement and conversation with all of you. The HoT will clearly enable us to proceed and have a full settlement, and this will benefit all of us,” Mallam Kyari stated.

He commended CNOOC and SAPETROL for their understanding, while expressing delight that the HoT will facilitate the conclusion of all renewal issues.
In his response, the Managing Director of CNOOC, Mr. Xie Vincent Wensheng, said the agreement has opened a new chapter in his company’s relationship with NNPC, stressing that it has provided a win-win situation for all parties.

On his part, Managing Director of SAPETROL, Mr. Toyin Adenuga, said the resolution of the dispute was a very important step towards further development of OML 130 and other new fields as the terms are now clearly spelt out.

The execution of the HoT signals the resolution of a tax dispute that arose from the $2.3bn acquisition of a 45% stake in OML 130 by CNNOC from SAPETRO in 2006.
The OML 130 consists of the Akpo and Egina Fields which have been producing since 2009 and 2018 respectively.
It is operated by Total Upstream Nigeria Ltd which holds 24% stake, while Petrobras Oil and Gas BV and SAPETRO hold 16% and 15% stakes respectively.