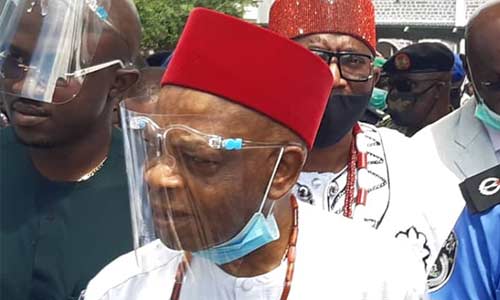 One of the suspended Anambra monarchs, Igwe Okonkwo of Alor Community has apologized to Anambra State Governor, Willie Obiano .

Igwe MacAnthony Okonkwo the Alor community monarch has appealed for Willie Obiano’s forgiveness, he asked the Executive Governor to forgive him for following his colleagues to pay a visit to President Muhammadu Buhari in Aso Rock with billionaire oil baron, Arthur Eze.

NAIJA NEWS NG reported that the Anambra State Governor, Willie Obiano, on August 14 suspended 12 Traditional Rulers in the state for accompanying Arthur Eze to Aso Rock without state government’s approval. Following this suspension The Nation reports that Igwe Okonkwo has begged Obiano to forgive his sin.

The Idemili South Local Government born King and others were suspended after the Traditional Rulers Council found them guilty of violating the rules of monarchs in the state.

Igwe Okonkwo said: “It was a serious slip on my part not to have informed the government about the trip to Abuja before embarking on it. I, therefore, tender an unreserved apology.”

Okonkwo denied the rumour that he was induced with money and gifts before agreeing to accompany Prince Eze to see President Buhari.

In a statement signed by Chief Sir Uzoma Igbonwa (Okife) President-General, Alor People Assembly (A.P.A.), formerly Alor People’s Convention the group disowned Igwe Okonkwo’s actions, they also said he was forced on them as King. Read excerpt from the statement below:

“We hereby wish to state our unequivocal support for the Governor and every step he has taken to restore sanity to our traditional institution, the suspension of erring Traditional Rulers which includes the purported Traditional Ruler of Alor.

We the good people of Alor are peace loving, law abiding and loyal to the Government of Anambra State and shall continue to do so. We hereby dissociate our entire community from the actions of Igwe Elibe Mac-Anthony Chinedu Okonkwo who was imposed on our community and has strangely been conducting himself to the disapproval of our people, culminating in the latest sabotage against the government of Anambra State.”

See How To Print Out Your National ID Card By Yourself