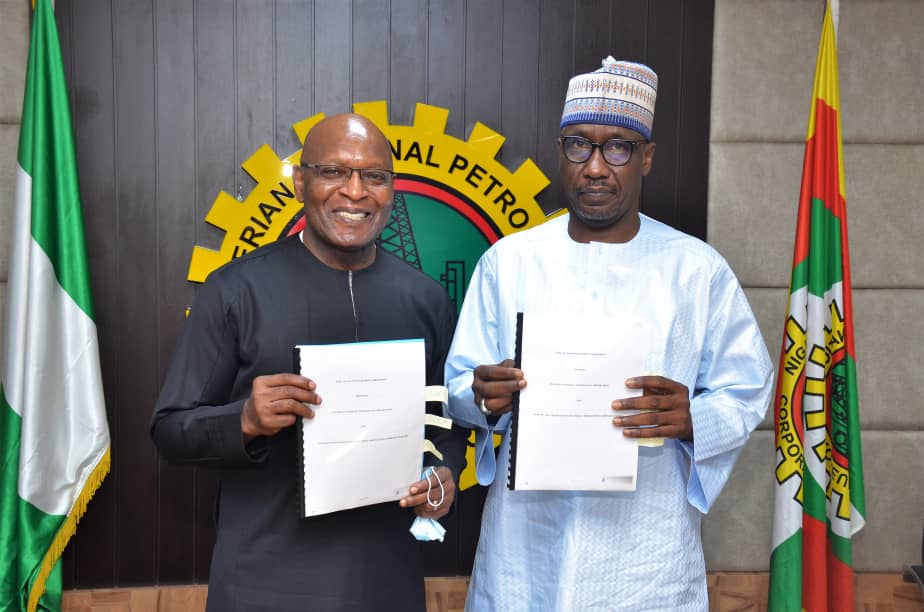 The gas development and commercialization programme of the Nigerian National Petroleum Corporation (NNPC) received a boost Thursday with the execution of the Oil Mining Lease (OML) 143 Gas Development Agreement (GDA) by the NNPC and its partner, Sterling Oil Exploration and Production Company (SEEPCO).

READ : NNPC Boosts Daily PMS Truck- out from 550 to 1,661 to Tackle Fuel Queues
Speaking at the GDA signing ceremony which held at the NNPC Towers, Abuja, the Group Managing Director of the NNPC, Mallam Mele Kyari, said the gas commercialization strategy of the Corporation was in sync with the Federal Government’s National Gas Expansion Programme (NGEP), adding that the gas from the project would be processed at the Ashtavinayak Hydrocarbon Limited (AHL) 125million standard cubic feet (mmscf) of gas per day gas plant located in Kwale, Delta State.

“This opens a gateway for other opportunities in the Oil and Gas Industry, not just SEEPCO Group but for other companies too. We are happy that this will unlock significant volumes of gas which will deliver 125mmscfd to the Midstream plant that you have built. Of course, this is a great milestone for us and we are happy to do business with you. You are a very reliable partner because when you say things, you get them done,” Mallam Kyari stated.

He said the development of OML 143 would bring value for the Federal Government, NNPC and SEEPCO Group which would in turn boost the nation’s economy.
On his part, the Group Managing Director of SEEPCO, Mr. Tony Chukwueke, said the OML 143 GDA is a major milestone for the country because it was the first Agreement in Nigeria that fully separates gas development from oil production, noting that the arrangement would enable wholistic development of the gas potential in the block.
He further explained that the GDA was a significant step as it was the first of its kind to expressly include terms that encourage the contractor to be effective in its cost management thereby passing on significant revenue to the Federal Government, NNPC and other stakeholders.

“I will like to take this opportunity to thank the GMD, NNPC for his contribution to Nigeria and also recommit that SEEPCO is determined to play its role in the energy industry in Nigeria,” Tony Chukwueke reassured.

The Gas Development Agreement is required, pursuant to the Production Sharing Contract obligations, to set out the terms for the development of the 1.2tcf Non-Associated Gas oil block by SEEPCO which is the Contractor with the NNPC is the Concessionaire.
The additional gas supply from the project would raise the nation’s gas production profile, make dry gas available for the proposed 650 megawatts NNPC/SEEPCO Independent Power Plant, boost in-country supply of Liquefied Petroleum Gas (LPG) and general domestic gas utilization, increase energy security, and create job opportunities for Nigerians.

Are you looking to Grow Your Natural Hair or Worried about Itchy Scalp? Cocosheen is Here for You!