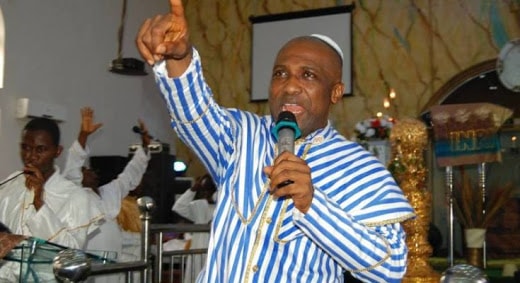 The leader of INRI Evangelical spiritual church, Primate Elijah Ayodele has once again revealed God’s mind about the Ondo state gubernatorial election which will come up on October 10, 2020.

The election has three major contenders from the All progressive congress with the incumbent governor, Rotimi Akeredolu as the candidate, the People democratic party with Eyitayo Jegede as the candidate and the Zenith Labour Party with the deputy governor of the state, Agboola Ajayi as the candidate.

In an interview session, Primate Ayodele made it known that the spirit of God says the victory of the election is between the governor of the state, Rotimi Akeredolu and Agboola Ajayi, who decamped from the APC to PDP, then to ZLP.

Speaking on the candidature of Eyitayo Jegede, Primate Ayodele adviced that he shouldn’t waste his money because he doesn’t stand a good chance in the election.

‘’Agoola Ajayi will push more than Eyitayo Jegede in the coming election, Jedege has not taken the right steps, if Agboola Ajayi does the needful, He stands a chance against Rotimi Akeredolu in the election.

As I have said earlier, Rotimi Akeredolu will not get the people’s mandate and he will not win except he uses Manipulation, money, power of incumbency, security and technicality.

The other candidates don’t have these system and they are not working against it yet, they are still making noise, if Agboola Ajayi can work seriously against these things, He still stands a chance’’

Recall that Primate Ayodele had earlier in a prophecy that Rotimi Akeredolu will not win the election except through power of incumbency, money, security, manipulation, technicality, and coalition.

‘Rotimi Akeredolu will not win Ondo election except through manipulations and technicality, He must not underrate anybody, the candidate of the PDP, Eyitayo Jegede and ZLP, Agboola Ajayi are out to beat him. He needs to be careful because he will be betrayed, there are moles in his camp.

Furthermore, while speaking on Edo state, He made it known that the APC and it’s candidate, Ize-Iyamu shouldn’t bother to drag Godwin Obaseki to court because they will lose the case.

While reacting to the insecurity in the country which saw the Governor of Borno, Professor Zulum attacked by Boko Haram twice in a week, Primate Ayodele made it known that He made the warnings on his annual book of prophecy which was released few months ago. He prays that God sees Nigeria through as regards security but stated that the only solution is for President Muhammadu Buhari to sack the service chiefs.

It is worthy of note that Primate Elijah Ayodele has made several prophecies that looks unbelievable but came to pass. Primate Ayodele was the only prophet that prophesied the fall out between Oshiomhole and Obaseki, Fallout of Oshiomhole as APC national chairman, attack of Borno state governor, victory of Godwin Obaseki, the coming of Covid-19 into the world, deaths recorded as a result of Covid-19, to mention a few.