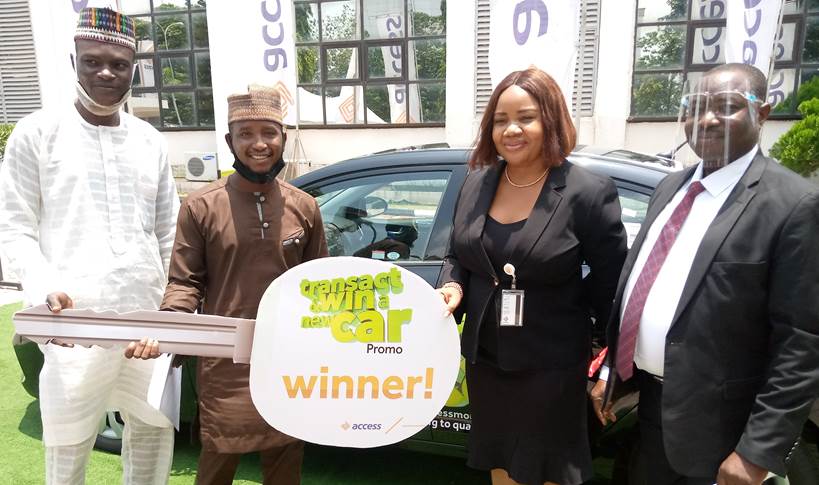 A Kaduna-based onion trader, Dahiru Umar, yesterday, emerged winner of the grand-prize of the Access Bank, Transact and Win a Car promotion.

Speaking shortly after receiving the keys of the brand new car at the  Access bank regional office in Abuja ,  Dahiru while expressing excitement at winning told newsmen that he has been a customer of the bank for more than 14 years adding that Nigerians should seize this opportunity to patronize the bank and enjoy the benefits that comes from it.

Regional Sales Director, Abuja/North-West, of the bank, Mr. Aminu Inuwa, said , in his remarks, that the grand prize was a demonstration of the bank’s commitment to fulfilling its promises to its customers.

According to him, “We also have about 720 customers that can transact and win from N1000 up to N1 million. “This is our first grand prize of a vehicle won by Dahiru Umar, one of the bank’s customers who is doing business at Nnewi and resides in Kaduna State. “So today we have gathered here to inform everybody and our teeming customers- even if you have an account in Diamond Bank initially now Access Bank and even if your account is dormant, you can activate your account and have the chance to win these prizes.”

Inuwa added that the bank had witnessed a surge in its customer base since the flag-off of the promotion. “We have witnessed tremendous progress as customers are trooping in to open many accounts. Some who had allowed their accounts to be dormant are also re-opening them because the campaign is targeted at the unbanked populace as well as existing customers. “We want to bring financial inclusion closer to everybody’s home and that’s why we are into this campaign,” he explained. On the duration of the promotion, he said that it was in its phase three and winners announced regularly. He added, “We are targeting about 10,000 customers in the directorate and for the bank, we are targeting about 50,000 new customers and we will continue to engage more customers to open accounts with the bank.”