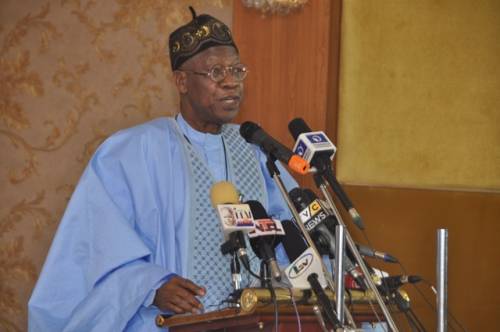 Lai Mohammed, Minister of Information and Culture, on Tuesday, June 30, 2020, appeared before the National Assembly to make a case for the pay-as-you-go .

By the minister’s definition, PAYG is a model that: offers a daily, weekly, bi-monthly or such other limited duration;  allows the subscriber to pick and choose channels or content priced either individually or on a small themed bouquet, such as a sports package; and gives subscriber the latitude to view at any point in time.

He insisted that the two major pay television platforms in Nigeria, MultiChoice and StarTimes can introduce the PAYG model to exist side-by-side with their normal billing model.

Lai Mohammed went ahead to say the PAYG model has become necessary to provide an affordable option for poor Nigerians, reduce money spent on subscription even when the service is not used due to the erratic nature of power supply in the country.

However, a fact-check done by TheCable shows that his claims are false.

Read the fact-check below:

CLAIM NO 1: POWER SUPPLY IN NIGERIA IS ERRATIC

The minister said the clamour for the abolition of monthly billing system and the introduction of a PAYG plan has become necessary because of epileptic power supply in Nigeria, thus “hindering the viewer satisfaction and access to the services provided”.

FINDING: True. The power infrastructure in Nigeria has been a major issue for decades. Many homes are powered by generators. The minister’s argument that subscribers will enjoy satisfaction if they watch only when they have power or when they are at home, however, does not countenance the fact that when Pay TV operators are bidding for broadcast rights for programmes running into millions of dollars, the content owners do not factor the erratic power supply in Nigeria into the pricing.

CLAIM NO 2: PAYG IN TELCOM IS LIKE PAYG IN CABLE TV

The experience in Nigeria’s telcoms industry, according to Mohammed, can be applied to Pay TV. In the beginning, MTN and Airtel said per second billion was not possible until Globacom launched in 2003. After that, other networks joined and that led to cheaper services.

FINDING: Apples and oranges. It is true that mobile phone services became more affordable in Nigeria when Globacom introduced per second billing as against the per minute that was in operation. Before then, subscribers paid for one full minute even if the call was for just one second. However, telcos do not pay for programmes and contents. For instance, Pay TV operators pay the full price to buy rights to a two-hour movie — even if the subscriber is going to watch only one minute of it. Comparing telcoms and Pay TV may be a mismatch in this case.

CLAIM NO 3: IN THE UK, NOW TV OFFERS PAYG

The minister gave a number of examples of PAYG services across the world. He said in the UK, NOW TV offers such services. “For a single payment, viewers can get unlimited 24-hour access to all six Sky Sports channels. NOW TV customers gain access to matches and events, including live Barclays Premier League matches, Formula 1 and Ashes test matches. NOW TV is available for connected devices, including computers, tablets, smartphones and Xbox 360, and subscribers only pay for the days they want to watch with a Sky Sports Day, Week or Month pass, from just £9.99. This was introduced in March 2013.”

FINDING: That is not the complete picture. NOW TV has a 24-hour access bouquet to all six Sky Sports channels for £9.99. This means N4,850 per day, N33,950 per week and N135,800 per month. This makes Sky Sports weekly plan far more expensive than the most costliest pay-TV offer in Nigeria — the DStv premium package which goes for N16,200 and offers over 175 channels, including sports channels. This Sky Sports plan is offered via NOW TV, which is an internet TV/streaming service. The cost of internet will be on the consumer. In simple words, this means the consumer will have to pay for internet data to stream TV for the entire day. Therefore, in addition to N4,850 paid per day, consumers will have to pay for data.

CLAIM NO 4: IN US, ORBY TV OFFERS PAYG

Giving another example, Mohammed said: “Orby TV, a new US PAYG pay DTH (Direct-To-Home) satellite service announced on October 16, 2019 that the platform would offer a high-quality and affordable prepaid. PAYG satellite pay TV service directly to consumers at a low cost, with no contract and no internet service required. This indicated that subscribers would not be forced to pay for a bundled service inclusive of internet data and would not be mandated to sign a contract for any duration.”

FINDING: Apples and oranges again. Orby TV offers monthly subscription, not PAYG. TheCable found out that Orby’s start-up costs are significant. One-time fee is at least $250 (about N97,000) and monthly charges start at $40 (about N15,500). Orby TV offers two different types of receivers: the standard TV receiver which costs $100 (N38,800) and the DVR-capable $200 (N77,530). Subscribers must buy an additional receiver at $50 (N19,300) for every extra room. Also, subscribers have to pay at least $150 (N58,000) to have the satellite dish and outdoor antenna installed. For premium channels such as HBO, Cinemax, Starz and Epix, there are add-on fees.

Mohammed said Comcast Corp. in the US has rolled out a new PAYG programme that allows consumers to sign up for television and internet services for seven or 30 days at a time. Under the plan, called Xfinity Prepaid Services, he said, “customers will pay a one-time equipment setup fee and can ‘refill’ their service without limitations on the number of times they can renew”.

FINDING: Apples and oranges yet again. The Comcast Xinity pre-paid service is internet-based and not a satellite broadcast service. Therefore, the cost structures are totally different. For Comcast, active prepaid internet service is required, and this is an additional cost. Monthly prepaid entertainment is $37 (N14,300), kids and family $32 (N12,400), sports and news $57 (N22,000) and instant TV basic $22 (N8,500). It is called PAYG because the service is not offered on a 12-month contract basis and a subscriber has the option to go for a monthly subscription and can cut off after a month without incurring a penalty.

The minister argued that the pay-as-you-go model will “grow an untapped low-income subscriber base and such a new, more flexible option may even create some goodwill for a Pay TV brand”. Mohammed, here, is suggesting that the model will allow low-income earners access into the pay-TV market. His examples are Sky Sport, Orby TV, Comcast, Foxtel, readyTV, and DISH TV.

FINDING: False. We took a look at the models and the pricing, and found that the argument does not hold up. In fact, PAYG is on the long run more expensive than the monthly subscription. In Jamaica, a developing country like Nigeria, readyTV offers the cheapest PAYG services at J$150 for 27 channels per day. This translates to N416 per day at N2.77 to J$1 or N2,081 per week or N6,940 a month. The cheapest DStv monthly package in Nigeria costs N1,850 for over 40 channels. This is three times less than readyTV.

The packages cited by the minister are not cheaper than the current monthly models offered in Nigeria. Foxtel Play in Australia and Comcast Xfinity in the US are internet TV offerings, which cannot be compared to satellite TV like DStv and StarTimes. More so, internet cost in Nigeria does not support low or middle-income earners streaming TV.

VERDICT: Mohammed’s claims amount to comparing apples and oranges: internet-based TV vs satellite-based Pay TV; ordinary contents vs premium contents; and business models that are not at par with each other. He appears not to be aware that subscription rates are determined by the cost of acquiring broadcast rights. Pay-TV providers that do not show premium contents, such as live football and exclusive movies, can offer far cheaper services compared to those who pay millions of dollars to acquire rights. Most of the examples Mohammed gave do not have premium contents.

Also, while a case can be made for the introduction of PAYG to make services more affordable, the agitation does not cover enough grounds: broadcast rights are sold as a whole package, not on a pay-as-you-go basis. Even the PAYG examples he gave in Nigeria do not offer expensive premium contents, so their costs are cheaper. By his own admission, the service providers decided on their own to offer PAYG, not through legislation. In all the cases he cited, no cable TV provider was forced to offer PAYG.

Finally, the PAYG model does not necessarily benefit the poor suggested by Mohammed. According to the National Bureau of Statistics  (NBS), 82.9 million Nigerians spend less than N376.5 a day on food and other basic needs such as shelter, clothing, health, education, electricity, and security. The cheapest PAYG service available in Jamaica requires a daily payment of N416 or N6,940 per month — which is still more expensive than the current models in Nigeria.

Maximising the potentials of e-commerce in Nigeria