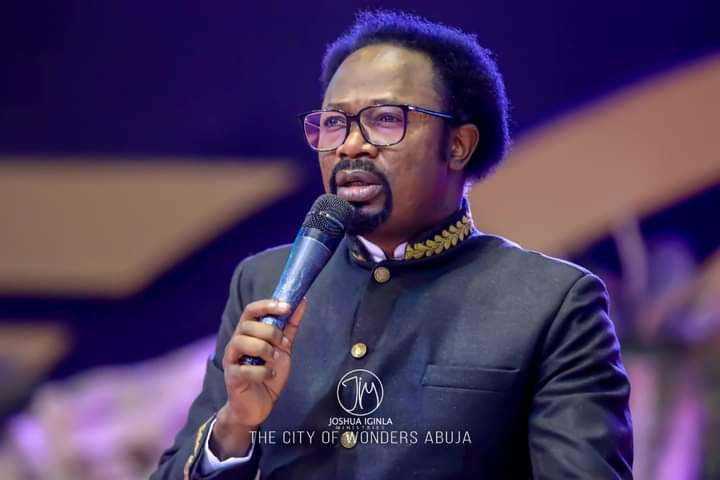 The General Overseer of Champions Royal Assembly, Prophet Joshua Iginla has blasted some men of God who envy, gossip thriving ministers and those preach against medical science in their churches, endangering the lives of their church members.

In an interview, the man of God revealed that religious leaders need to be very careful with their utterances in church so that they won’t jeopardize the lives of their members.

Emphasizing on Covid-19 vaccine, Iginla stated that religious readers should not force their opinion on their church members because they are also entitled to their opinion.

‘’Religious leaders should be very careful of statements that can further jeopardize the lives of their followers, take heed to the flocks God has given to you.

Medical science should not be de-emphasized, lets be realistic, a man of God is preaching against medical science but He is taking medicine for diabetes, checking his blood pressure, flying oversea to treat himself, let us stop acting this superman mentality, this is why a lot of men of God die, they try to create an impression that is not real, why ask your members not to take vaccines, allow them to take their decisions, don’t force your decision on them. You don’t allow them to take it but you go behind to take it, and you don’t tell them, you are worse than the devil, that is my take.

I understand and have seen what the medical science has done, Luke was a medical doctor, Jesus had him in his team for an assignment, Elijah was very anointed but died of a sickness, there are so many men of God living with diseases, stop being a superman

I believe in divine healing, I pray for people that are sick but I am not against the medical science, let us behave like enlightened people and not illiterate. The reason government go against the church sometimes is the way most clergy men behave, we should speak truth to power but at the same we shouldn’t manipulate our flocks’’

While speaking on why the church is weak, Joshua Iginla lamented on the fact that the church has derailed from its primary assignment and have chosen to be part of the world because Jesus mandate for the church is strictly evangelism, but that isn’t happening anymore

‘’A lot of believers in this end time are thinking of wealth acquisition, money, we are ego centric, we have become the world, and the world is becoming the church, there is a lot of misnomer because the church has lost her place. One of the most powerful mandate is not about big church, it is about taking the gospel to the world, especially rural evangelism, I started my ministry from there, you will be surprised there are villages people have not heard of the gospel of Christ, we need to redeem the time for the coming of the master, the problem is that we are condemning one another, I have never seen a generation of men of God that will condemn its own and protect a herbalist, we don’t preach against the evils, we preach against one another, and that is why the church is getting weaker.

Today there is an Islamic bank but where is the Christian bank, we don’t know how to put our resources together, if we are not talking about doctrine, we are talking about principles, bringing down a man of God, no matter how portray yourself to demonize another man, everybody can’t attend your church’’

In time past, Prophet Joshua Iginla was known to radically give out things during his birthday celebration, there was a time he gave out 32 cars during one of his birthdays.

However, for sometime now, He has toned down from doing this radical business. While explaining his actions, He explained that He has never stopped giving but only changed the dimension.

‘’I have not toned it down, but I changed my dimension, I started by giving radically, I gave 32 cars, houses, went to Botswana, gave out landed properties, I have lost count of cars I have given out and people said I was advertising myself, at a time, they were giving scriptures on why I shouldn’t give openly.

The next movement of God in this end time won’t be by power or prophecy, it will by love and passion. Welfare is one of the things that will bring the next generation to God, by the time we give continually, we will convert more souls than raising the dead to life and that is why I see that someone can be a General overseer and find it difficult to give.

Some general overseers have cars, houses and none of their follower have a landed property, and he is preaching holiness, demonizing everybody yet pastors under you are given cars, you rob them off and collect it.

What most prophets are doing in this generation, some people who say they are anti-prophecy might not be able to do 10 percent of it, if you see those helping lives, they are in the power and prophetic ministry.

One of the issue we have is we don’t know how to defend ourselves, we allow some people to demonize us, lambast us, and encapsulate us to a junction where they begin to think they own God and that’s why I am a stubborn, radical prophet, you give me fire, I give you fire, you give me water, I give you water.’’

Related Topics:Joshua Iginla
Up Next

Malami Is Supporting The Killing By Herdsmen In South East – Gov. Umahi