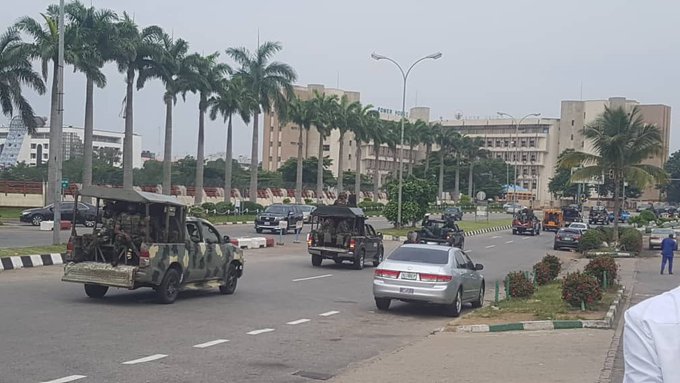 Revolution Now protest led by Omoyele Sowore is going on nationwide today. The protest has started witnessing the power of the Nigerian security agencies.

NAIJA NEWS NG reports that over 40 protesters have been arrested by joint task force of the military, police and other security agencies, we can also report that the city of Abuja has been highly militarized .

Below are eyewitness updates from protesters from all over the nation.

“YeleSowore: RT adeyanjudeji: We are currently witnessing a joint madness by the military, police and other security agencies as over 60 of our comrades have been arrested over peaceful #RevolutionNow protest. The Abacha days are here once again.”

“When we sit at home, the governments call us ‘Lazy’.
When we protest peacefully, they assault and arrest us.
When a group agitates and demands referendum they shoot and term them terrorists.”

“You got into power through series of protests and politics of propaganda,you challenged the govt of the day with fake news and the likes but you dont want your govt to be criticised, you want to silent dissenting voices at every given opportunity, O wrong nau. # Revolution Now ”

“As much as # Revolution Now protesters want to do good to make Nigeria a better place. The protest looks more like its for a lost cause. Also, in Nigeria, security personnel meant to protect Demonstrators will only arrest them.
@YeleSowore
needs to look into other means.”

“Until citizens own the process and begin to take action without being told or asked to noting changes. As it is today we seem to be too comfortable # Revolution Now ”

“Police, Army and Airforce deployed in Abuja because of a protest but they can’t do this for Southern Kaduna herdsmen massacre.

They’ve arrested and assaulted protesters. This govt has lost it completely. History will never forget and forgive Buhari.

YeleSowore: RT adeyanjudeji: We are currently witnessing a joint madness by the military, police and other security agencies as over 60 of our comrades have been arrested over peaceful #RevolutionNow protest. The Abacha days are here once again. pic.twitter.com/zhRkue1qEt

NNAMDI KANU : Fulani Will Use Miyetti Allah Vigilante To Conquer Us