The coordinator of Alberta Canada Province for the Indigenous People of Biafra, IPOB , has resigned .

News Mail Nigeria reports that the Alberta Canada Province coordinator, Celestine Onwuka said he resigned as coordinator in the proscribed group because of corruption in the Indigenous People of Biafra by the topmost leaders of the group.

He also said he used the opportunity to free himself from the fraudulent oath he took as IPOB member and also free those he has led to do same. 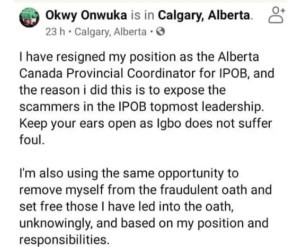 Since 2020 many top IPOB heavyweights have resigned from their positions and even totally disassociated themselves from the group. Many of them accused the founder Nnamdi Kanu of not doing what he said he will do .

You will also recall that the most shocking of them all was the resignation of IPOB Deputy Leader, Uche Mefor. Uche Mefor resigned late last year and floated his own radio station to continue his agitation.