Shanty Town Is About Prostitution And Corruption – BBNaija Vee

Shanty Town TV series has continued attracting the attention of Nigerians who have watched the show .

by Admin
in Nigerian Entertainment News

Shanty Town TV series has continued attracting knocks and praises from Nigerians who have watched the show .

NAIJA NEWS NG reports that the most controversial part of the TV show is Nnacy Isime’s scene with Richard Mofe-Damijo . In the scene Nancy Isime was unclad .

Big Brother Naija star, Vee , has condemned the show, she said the show does not promote anything African culture is about.

The beautiful singer in correcting the impression of her followers took out time to share a tweet that reads ” Nudity is not part of our culture” Shanty Town is about crime, prostitution, corruption, etc. if it’s culture you’re looking for, go and watch AM Epic and stop disturbing us. ” Which is a core reality that people ought to see, as not everything coming out of Africa must tell its story.

READ : You Are An Anti Christ If You Have Not Collected Your PVC- Eucharia Anunobi

The series which has gained game immediately after being released has gathered so much momentum and attention, as there is that feeling of excitement coming from many of the people that have seen the latest series, and the reactions has been quite impressive, with the impressive work of the actors. 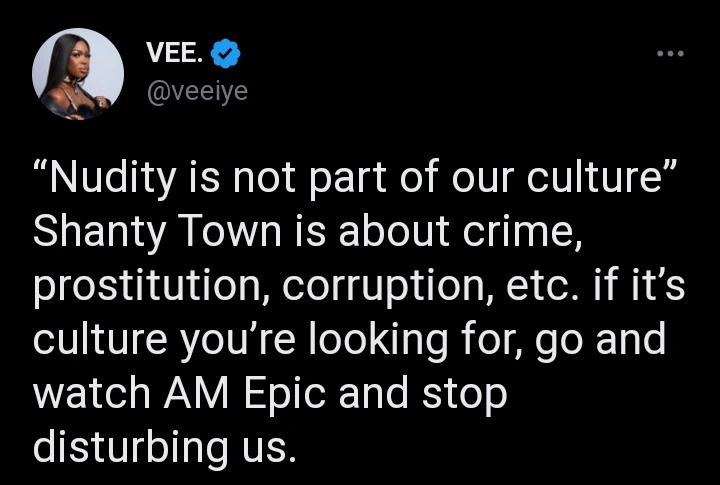