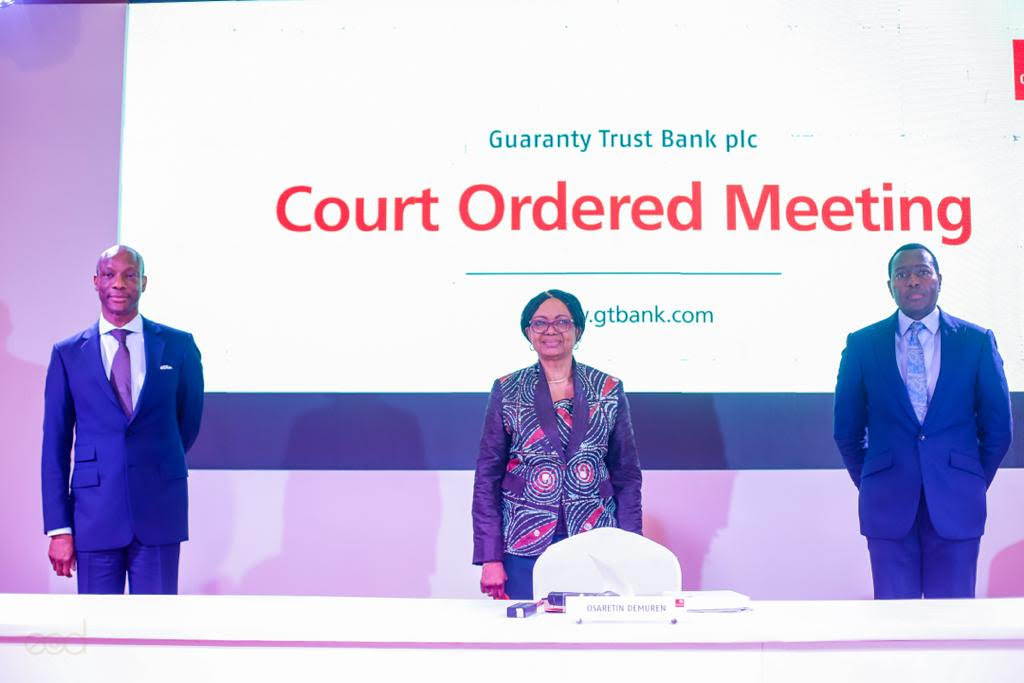 The shareholders of GTBank Plc has approved the holding company structure for the bank, as they expressed excitement over the benefits they would derive from the new structure.

At the Court ordered meeting held on Friday, the investors gave their approval to the company for the transfer of the 29,431,179,224 ordinary shares of 50 kobo each in the issued and paid-up share capital of the bank held by them to Guaranty Trust Holding Company Plc. This was done in exchange for the allotment of 29,431,179,224 ordinary shares of 50 kobo each to the shareholders in the same proportion to their shareholding in the bank credited as fully paid without any further act or deed.

Expressing his members excitement over the planned restructuring, the founder, Independent Shareholders Association of Nigeria (ISAN), Sir Sunny Nwosu, explained that the shareholders are excited because the arrangement the bank has put in place is devoid of complexities usually known as share reconstruction.

According to him, the bank has performed well under the leadership of the Chairperson and the Managing Director and thus projected that the HoldCo would perform better if the duo are still in charge of the new brand.

He said, “We are excited about the development because we are going to get value as everything we have would be transferred to the holding company. There will be no manipulation as a result of reconstruction that usually leads to fractional shares.”

Also commending the bank’s leadership and ingenuity, The President, Progressive Shareholders Association of Nigeria, Mr. Boniface Okezie, noted that, “GTBank has over the years proven to be a force and leading initiator of revolutionary advancement and technology based development in the nation’s banking industry and we look forward to the growth and advancement it is sure to bring into the new business areas it will be taking on with the Holdco structure”.

“The arrangement where all existing shares of the bank would be transferred entirely to the Holdco in the name of the beneficial owners is good, while the same number of units and percentage would be held in the new entity, is commendable”, he added.

Also speaking at the Court Ordered Meeting, on Friday, Managing Director/CEO, GTBank Plc, Mr. Segun Agbaje, explained that in line with Central Bank of Nigeria (CBN)’s regulations, which require the separation of commercial banking business from other financial services businesses, the bank is adopting a HoldCo structure.

He said, “I am delighted over the approval by shareholders for the holding company and I assure the investors of a more rewarding future. The bank will not embark on any share reconstruction as the same number of shares they have with the bank will be maintained.

While explaining the benefits of the HoldCo structure, Agbaje explained that the overall strategy was to create an operating model that would profitably grow the bank’s presence in the market for commercial banking and non-banking financial services in order to achieve the aspiration to be the dominant financial services group.

NCOY: FirstBank is powering the Next Generation of Nigerian Innovators and Entrepreneurs